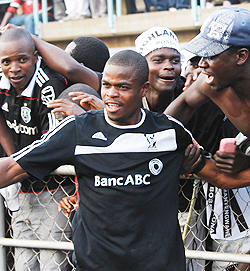 FC PLATINUM and Highlanders maintained their winning start to the new Premier League season with identical 2-1 away wins at Black Mambas and Triangle on Saturday.
Platinum lead the table on goal difference with the two teams tied on nine points.
Nelson Mazivisa scored his second brace of the season against Mambas to take his goal tally to five in three matches at Morris Depot.
Mazivisa finished off a brilliant move on 25 minutes with Charles Sibanda heavily involved in the build-up.
Mambas’ Nicholas Alifandika then struck a sweet free kick two minutes after the break to level the scores but Maziwisa connected Ali Sadiki’s cross with a minute on the clock to secure victory for Tenant Chilumba’s side.
At Gibbo, Highlanders went ahead in the 25th minute through Bruce Kangwa before William Gondo equalised in the 39th minute for the Premier League debutants.
Masimba Mambare then came off the bench to score the winner in the 82nd minute just as his coach Kelvin Kaindu was sent to the stands for remonstrating with the referee.
Chicken Inn moved to third after beating Tripple B 1-0 at Luveve Stadium.
Harare City recorded the biggest win on Saturday when hammering Motor Action 4-0 via a brace from William Manondo and goals by Osborne Mukuradare and Trymore Nyamadzawo.
With the win City moved into fourth place.

CAPS United picked up their second win of the season with a battling 2-1 victory over Black Rhinos 2-1 at Gwanzura.
After losing their opening match of the season 1-0 to Harare City, United picked themselves up in their second game to beat struggling Motor Action 2-1.
In a game of penalties, Hardlife Zvirekwi converted two for United while Brighton Chandisaita scored for Rhinos.
On Sunday, Buffaloes returned to winning ways by thumping Hwange 4-2 at Sakubva thanks to a brace from Farai Banda and two other goals from Jacob Muzokomba and Steven Sibanda.
Hwange, in their first loss of the season after two draws, scored through Gilbert Zulu and Nkosana Siwela.
How Mine squeezed past Monomotapa with a 2-1 victory at Luveve with goals from Simon Njeleza and Timothy January. Zvikomborero Bizet was on the score-sheet for the visitors.
CAF Champions League

How Mine 2-1 Monomotapa, Buffaloes 4-2 Hwange