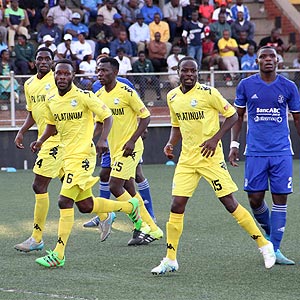 FC Platinum stormed into the Chibuku Super Cup final in emphatic style after upstaging Harare City 3-0 in a semifinal match played at Mandava Stadium on Saturday.
Rodwell Chinyengetere’s first half strike was added onto by Charles Sibanda and Marshal Mudehwe, in the second half to send the platinum miners through.
The result ended Harare City’s quest to defend this Cup which they won last year.
By winning, FC Platinum ended a slump in form on the league front that has seen them risk failing to win the league title.
Now with their chances of ending the season with at least a piece of silverware, boosted by Saturday’s win, they will wait to know their Chibuku Super Cup opponents after the other last four clash between Highlanders and Ngezi Platinum on Sunday.
The win on Saturday saw FC Platinum revenging on Harare City who beat them 2-1 in a league match three weeks ago.
City nearly caused an upset on Saturday when William Manondo was denied by FC Platinum goalkeeper just four minutes into the match.
But the hosts gained composure to take control of play and Chinyengetere struck on 32 minutes.
After the restart, City almost equalized by Ronald Chitiyo has his effort crash against the crossbar.
Sibanda added FC Platinum’s advantage with a goal on 77 minutes and Mudehwe killed the match as a contest five minutes later.