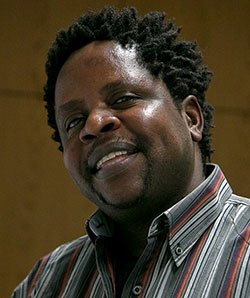 TWO Zimbabwean playwrights have combined to pen a theatre play on the deadly Ebola virus which has claimed thousands of lives on the African continent.
The play is aimed at helping spread awareness of the disease to fear-stricken Zimbabwean communities.
Christopher Mlalazi, who is currently based in Germany and Bulawayo-based Thabani Moyo came together to write a script for the play which is set to premiere at the end of November.
The Ebola outbreak has already claimed more about 4,447 people in West Africa, according to the World Health Organisation (WHO).
Ebola has caused panic all over the world with most governments closing their borders to people coming from the virus-stricken countries.
Although Zimbabwean health authorities have reiterated, on several occasions, that not a single case of Ebola has been recorded in the country, anxieties remain.
In an interview with NewZimbabwe.com Mlalazi said the play would assist in raising awareness about incurable disease.
“Using a minimal cast, the play focuses mostly on public misconceptions on and of the disease which themselves are highly dangerous as they can lead to further infections that could have been prevented, and especially in disadvantaged communities.
Our aim is to start rehearsals at the beginning of November, and have the play open at the end of the same month. Our wish, if it is possible, will be to see the play taken to remote communities around the country as an awareness teaching tool as soon as is possible,” Mlalazi said.
The play provisionally titled ‘Isolated,’ tells the story of a group of people who falsely believe they have Ebola, but decide to conceal this ‘false’ status.
“This state of affairs then give us the chance to teach on Ebola, but still maintaining the theatre story angle. I don’t want to tell too much on the concept before we launch,” he added.
Mlalazi also appealed to well-wishers and government to assist in taking the play on a nationwide-wide tour so that the message reaches all corners of the country.
“We are looking for partners to assist us to take this play tour around the country to pass on this important message. We are just two writers with nothing in our pockets but our pens and ideas. If anybody is interested I can be reached on chrismlalazi@gmail.com.Advertisement

“I hope the Ministry of Health and Child Care will seriously consider adopting our concept,” said Mlalazi.