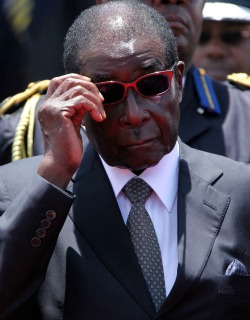 THE announcement by President Robert Mugabe to the effect that elections will be conducted on 31 July is not surprising; some of us saw it coming.  It is merely a confirmation of what everyone with political foresight anticipated.
It is surprising to see Zimbabwe’s political leadership panicking, especially Prime Minister Morgan Tsvangirai of the MDC-T who shared the same government corridors with President Mugabe in a shaky coalition government for more than four years.
Over the years, Mugabe’s political survival has always been a result of tact, guile and artful manoeuvring of both the process and the system to his advantage. It is not by sheer luck that he has politically survived to this end. He has managed to use chaos as a surviving strategy both within and outside his party.
During the liberation struggle, he used the chaos created by the assassination of Herbert Chitepo and the sudden death of Josiah Tongogara to emerge as the only credible leader capable of leading a new country at independence. But, whilst he won the watershed elections of 1980, he was not settled due to the nagging popularity of Joshua Nkomo.
The bloody conflict which characterised the dissident era was a national disaster which he however, used as an opportunity to cow Joshua Nkomo and eventually emerge as the country’s unchallenged leader. The unity accord which followed in 1987 completely eliminated any opposition to Mugabe, turning Zimbabwe into a one party state which was favourable to him.
But the birth of MDC in 1999 created headaches for the Zanu PF leader. However, as a master of chaos, he instigated and promoted farm invasions under the pretext of land reform which he had ignored for more than twenty years. The chaos which followed saw the tables turning and the return of his waning political fortunes. Whilst the country endured successive years of economic decline directly linked to the chaotic land reform, he remained politically relevant as a champion of black empowerment.
In 2008, Tsvangirai clearly defeated Mugabe in the first round of elections. Mugabe however created chaos by using violence and intimidation. His government ordered a re-run which was a sham of an election. He was forced to enter into a unity government with Tsvangirai due to widespread condemnation of the way he was re-elected. In the end he emerged victorious by retaining all the executive powers whilst Tsvangirai was condemned to a functionally ceremonial post of Prime Minister. Mugabe’s use of chaos won the day again.Advertisement

Whilst President Mugabe has failed to force the other coalition parties into an early election despite his insistence since 2010, he finally got a boost from the Constitutional Court which ruled that elections must be held on or before July 31. That ruling was in response to a legal challenge launched by a suspected Mugabe sympathiser. The judgement brought the much needed relief and an opportunity for President Mugabe to once again use the ensuing chaos to his party’s advantage.
But why is Mugabe rushing? The first reason is that President Mugabe is old. He can no longer withstand the rigor of a long campaign period. A short campaign period will not expose his frailties to the general public who are increasingly becoming more sceptical about his age, his health and his ability to be an effective President. His party does not have an alternative candidate. If his health fails him, Zanu PF is doomed.
Secondly, the possibility of a united front against his party has sent shockwaves into Zanu PF. The recent press conference in which opposition political leaders appeared together must have ruffled Mugabe’s feathers. In response, Mugabe is rushing elections to make sure Tsvangirai and the other opposition leaders have no time to strategically unite.
Lastly, Mugabe and his party associates know that they will never win if elections are free and fair. The only option is therefore to resort to their old tactic of utilising chaos to their advantage. The likely result will be a disputed poll which is likely to lead to another coalition government. That will keep Zanu PF politically relevant, hoping that an alternative, strong and consensus candidate will emerge in the future.
Whilst I sympathise with Tsvangirai’s frustrations regarding Mugabe’s unilateral proclamation, it is however sad to note that he is playing into Mugabe’s hands. Mugabe and his Zanu PF want Tsvangirai and his party to participate under protest or at the very least refuse to participate. That will confuse Tsvangirai supporters who will be left wondering whether to participate in voting or not. Such a scenario will be detrimental to the MDCs and an advantage to ZANU PF.
In addition, Tsvangirai’s approach of launching a court challenge is both futile and a waste of time. Whilst it may be a good way of playing to the political gallery, the challenge is sure to fail considering the bench is filled with Mugabe sympathisers who have given the directive in the first place. One would be unreasonable and naïve to expect the same court to reverse its own decision given the history of our judiciary.
So how should Tsvangirai and the other opposition leaders respond? The answer is simple. They should participate in the elections. Tsvangirai’s efforts to engage and include SADC in the chaos are welcome but not a solution. The MDCs should know that SADC came in to help put out a fire on a neighbour’s house but not take over the home. Whilst the house is burnt, the home still has its rules which must be followed by family members. Some of the rules may not be fair but must be challenged from within the home. Running to neighbours for help each time there is a problem in the home may be a sign of lack of leadership.
Tsvangirai and the other opposition leaders must work within the legal environment created by the unfortunate and misdirected court judgement. Instead of wasting time flying from one SADC country to the next, Tsvangirai should concentrate on launching an extensive and comprehensive political campaign, outlining the vision of his party and reminding voters that they should vote en masse to thwart any possible rigging which was alleged in previous elections.
But who should be on the MDC-T Presidential ticket? There is no doubt that Tsvangirai is the main force behind his party. His persona has appealed to the generality of Zimbabweans and endeared him with voters and party loyalists.
However the same cannot be said of his deputy, Thokozani Khupe. Whilst the Tsvangirai-Khupe ticket could have generated some enthusiasm in 2008, the situation has since changed and calls for strategic alliances with other possible candidates. In politics there are no permanent friends, neither are there permanent enemies. In that regard Tsvangirai’s MDC-T should immediately extend a hand to Ncube, Makoni and Dabengwa and invite them as coalition partners.
Whilst it would have been desirable to have a woman as a vice presidential candidate, unfortunately the situation at hand calls for unity with other political leaders who happen to be men. The MDCs can reserve the Parliament Speaker position for a woman should they win the elections. Welshman Ncube should be invited to stand as the first vice Presidential candidate.
If the rift between Tsvangirai and Ncube is too wide to close, Dumiso Dabengwa should be an alternative. Either way Dumiso or Ncube should stand with Tsvangirai. Simba Makoni would have been ideal, but he is ruled out by tribal politics which are difficult to ignore.  He should nonetheless be invited to participate as the second Presidential candidate.
The forthcoming elections are crucial and an acid test to the political leadership of the country. The idea of not participating is not an option. Mugabe has the legal backing he needed. Tsvangirai and his MDCs should not leave ZANU PF to occupy the political space which came as a result of people’s decade long suffering.
If Tsvangirai insists on boycotting elections, it may be time for Zimbabweans to start thinking about looking at other alternative leaders. The journey has been long and we hope Tsvangirai and his advisors will not be out-manoeuvred by Mugabe and his Zanu PF.
Jacob Nkiwane can be contacted on nkiwanejacob@yahoo.com