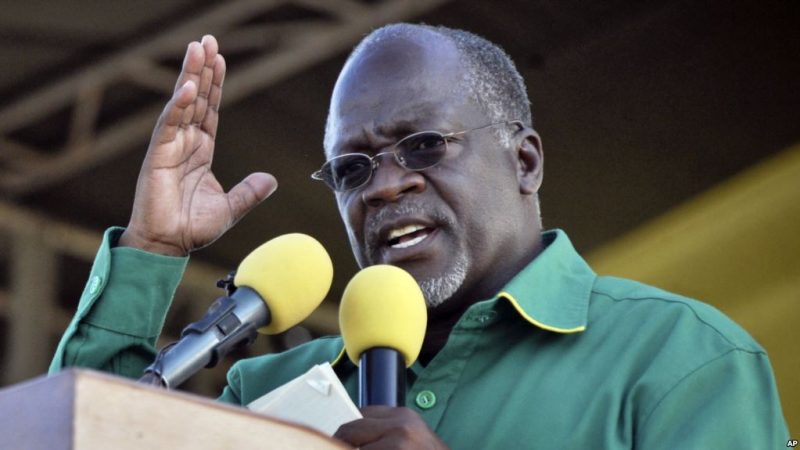 News of the death of Tanzania’s President John Magufuli drew mixed reactions; sorrow from many but bitterness from a critic who said he suffered during the president’s rule which he said shrank the country’s democratic space.

Hassan is expected to be sworn in to succeed Magufuli and complete his second five-year term which he had just started after winning elections late last year. She will be Tanzania’s first female head of state.

As tributes come in from other African heads of state, Tanzania’s opposition leader has been outspoken in his criticism of Magufuli.

Lissu, who spoke from exile in Belgium, recalled that in Sept. 2017 Magufuli said those who were opposed to his economic reforms deserved to die. Shortly after that Lissu was shot 16 times and he left the country for Belgium.

Lissu returned to Tanzania to challenge Magufuli in the Oct. 2020 elections. He lost to Magufuli in elections marred by violence and widespread allegations of vote-rigging. Government security forces blocked thousands of opposition monitors from observing the polls. Lissu returned to Belgium after criticizing the elections, saying that he was not safe.

Lissu said news of Magufuli’s death did not surprise him as he had received “credible information” since March 7 that the president was gravely ill.

“What surprises me is that his regime continues to lie of the cause of his death and the time he died,” he said.

He said the informed sources who had told him of Magufuli’s illness also told him that the president had been dead since March 10.

Magufuli had been missing from public view since Feb. 27, when he swore in a new chief secretary after his predecessor died with what many speculate was COVID-19.

For days government officials denied he was ill claiming he was busy and the president is not duty-bound to make public appearances.

“He is dead and this is an opportunity, a rare opportunity, for our country to come together for national reconciliation,” he said.

Many Tanzanians, however, mourned Magufuli’s death and praised his rule.

“I have never cried because of any leader’s death, but President Magufuli has made me cry because I remember his good performance,” Lucky Mwandeko said in Dar es Salaam, the country’s largest city. “He brought discipline into the country. If you go to public offices, you get good services and even the revenue authorities in Tanzania have announced an increase in revenue collections due to his efforts. So we have lost a very great leader.”

Kenya’s President Uhuru Kenyatta, who is also the chairman of the East African Community, announced Kenya will observe seven days of national mourning in which the country’s flag will be flown at half-staff.

“In the passing on of President Magufuli, I have lost a friend, a colleague, and a visionary ally whom I worked with closely, particularly on our commitment to forge lasting bonds between Kenya and Tanzania,” Kenyatta said in a live broadcast Thursday.

South African President Cyril Ramaphosa has expressed his sadness at the passing of Magufuli.

“South Africa is united in grief with the government and people of Tanzania as they go through this difficult moment,” Ramaphosa wrote.

Zimbabwean President Emmerson Mnangagwa posted on Twitter, sending sympathy to the people of Tanzania: “Africa mourns with you.”

Offering its condolences to Tanzanians, the United States issued a statement saying it “remains committed to continuing to support Tanzanians as they advocate for respect for human rights and fundamental freedoms and work to combat the COVID-19 pandemic. We hope that Tanzania can move forward on a democratic and prosperous path.”