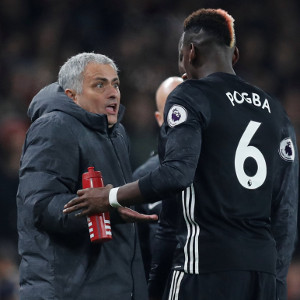 JOSE Mourinho revealed Paul Pogba was furious with Arsenal’s Laurent Koscielny for his role in the red card that rules the Manchester United midfielder out of next weekend’s summit meeting with Manchester City.
Pogba was sent off in the 74th minute of United’s 3-1 win at Arsenal on Saturday for a crude challenge on Hector Bellerin.
Koscielny responded to the foul by approaching referee Andre Marriner and appearing to call for Pogba’s dismissal.
Pogba sarcastically applauded Marriner as he headed for the tunnel and United boss Mourinho made it clear the France star wasn’t happy with the decision or his international teammate’s part in it.
“I just know that Paul is frustrated. A bit disappointed with this colleague, Koscielny, with this kind of reaction,” Mourinho said.
“He is very frustrated because everybody knows that Paul is a clean player and it was not his intention at all to be close to a red card.”
As well as his anger at Pogba’s treatment, Mourinho was frustrated at what he saw as Arsenal diving in the closing stages.
Danny Welbeck and Alexandre Lacazette, appealed in vain for penalties and, with his tongue firmly in his cheek, Mourinho said: “I know the pitch is amazing and maybe breeds a desire to go to the floor.
“If it was hard, no; if it was mud, no – the pitch is absolutely beautiful but I think they were a bit too much.
“If it’s not a penalty, it’s not a penalty.”
Pogba’s dismissal will earn him a three-match ban and his absence from the Manchester derby is a huge blow to United’s hopes of closing the gap on the leaders.
City are five points ahead of United, but can extend that lead to eight if they beat lowly West Ham on Sunday.
Regardless of that result, United will remain in the title hunt when their hated neighbours arrive at Old Trafford next weekend.
But Mourinho refused to label the seismic showdown as a make or break moment in the title race.
Asked if United’s fourth successive league win had sent a message to Pep Guardiola’s team, he said: “No message. We go match after match.
“We are second in the table. We won four consecutive matches.
“We managed to win and play well. I’m happy but there is no message.”
DESIRE AND INTENSITY
While Mourinho was coy about the derby, he was effusive in his praise of his players after they won at the Emirates for the first time since 2014, ending their long run of futility in away league games against top-six opponents.Advertisement

“We started with that desire and intensity, we played high and created mistakes,” he said.
“There were amazing individuals performances and collectively we were very strong.”
United were indebted to David De Gea for a superb display, the Spaniard making 14 saves, the joint most by a goalkeeper in the Premier League era.
“He made fantastic saves,” Mourinho said. “What I saw was the best goalkeeper in the world.”
Inevitably, Arsenal boss Arsene Wenger saw the two penalty appeals differently to his old rival and he took a swipe at Marriner’s performance.
“Last night I watched Napoli v Juventus on TV and we watched a top-class referee. If you want to analyse well, watch the difference between them and us and then you will see,” he said.
Even so, Wenger acknowledged Arsenal had only themselves to blame for a loss that effectively ended their title bid.
Antonio Valencia and Jesse Lingard punished terrible Arsenal defending to put United two up in 11 minutes.
Lacazette got one back but Lingard’s second sealed the points.
“You have to dictate from the start and show strength in duels from the back,” Wenger said.
“I felt that at the back our concentration was not sharp enough from the start and not dominant enough.
“We have produced an excellent performance but have conceded three goals and had at least 10 chances and were not efficient enough in the box, that is the reality.”