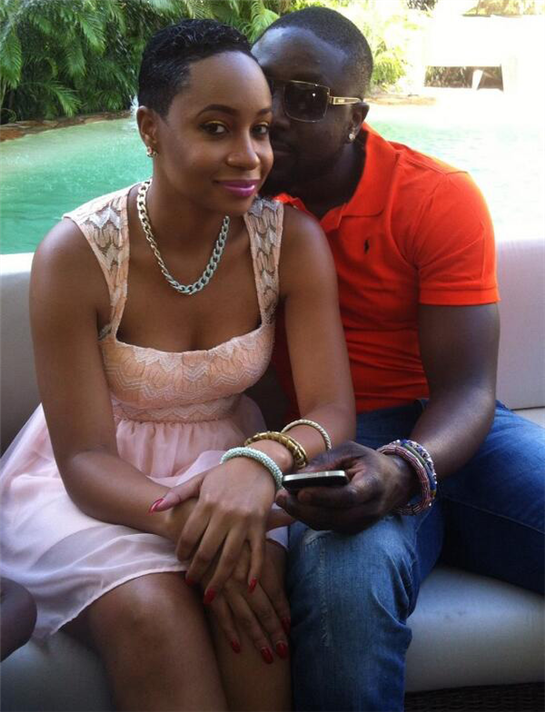 BIG Brother Africa – The Chase’s most loved couple, Zimbabwean Pokello Nare and Ghana’s Elikem Kumordzi’s more than a year-old relationship has hit the rocks.
The couple called it quits about three months ago with the Zimbabwean beauty accusing Elikem’s married ex-flame, one Gloria Lamptey, of constantly meddling in their relationship.
Elikem proposed to Pokello in style at the 2014 Ghana Music Awards this May.
But their relationship has, for the past few months, been dogged by rumours of Elikem’s involvement with other women and breakups
In November last year, Elikem vehemently denied fathering any of the children of former Black Stars player, Niii Odartey Lamptey, Gloria’s husband.
News went viral that the ex-Ghanaian international footballer, after a DNA test, found out that all three children he had with Gloria are not his biological children. The couple are said to have been married for 20years.
Trouble in paradise
After news of Elikem and Pokello facing difficulties again in the relationship emerged over the weekend, the Zimbabwean took to Twitter and Instagram to vent her frustrations with Gloria for meddling in her love life.
Pokello posted on Twitter that: “Can some1 ask Gloria Lamptey where she was when Elikem proposed? +233 23 3** **** stop callin and txtn my fone.46yrs old r u not ashamed?”
She also posted on Instagram that: “Can someone please ask this 46year old woman why she continues to harass me over an Elikem who is 26years old? Grandmother- I’m done playing games with you- Lets blast this shit. Your 3 children are the same age as him!!!! #Nonsense”.
Elikem, who was not pleased with the post, also posted on Instagram that: “@queenofswaggeralldayeveryday I called u with a strange number and sent u messages. U quickly run here and put up Her number and talk like this. SMH. Delete ur post Pokello. Thanx.”
Elikem, after publicly denying that he ever had an affair with Odartey Lamptey’s ex-wife, has for the first time publicly disclosed that he dated her.
In a series of tweets, the Big Brother star and fashion design, confirmed dating Gloria and also disclosed that she made life a hell for Pokello.
“I had an affair with Gloria Lamptey for 4 years before Big Brother. I tried to start a new life with Pokello but it seems my past won’t allow,” he posted on Twitter.Advertisement

He also disclosed that Pokello broke up with him three months ago because of Odartey Lamptey’s ex-wife: “Pokello broke up with me 3 months ago because Gloria was harassing her. I fought to get her back and now it seems I can’t win.
“The truth must come out once and for all.Yes I was young and had an affair with a married woman for 4 years.i denied media reports about it.
“When Pokello is mad, no one gets thru to her. Yes Gloria has made her life hell but the way she reacts is just wrong. I’m not perfect.”
“To my fans, I apologise. I have tried to clear this situation ensurin Pokello I want her but she keeps gettn calls n texts so we keep fightn,” Elikem apologized to his fans.