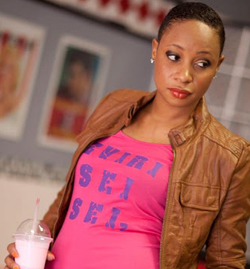 ZIMBABWE’S last representative in the Big Brother Africa (BBA): The Chase reality show, Pokello Nare, was evicted from the house on Sunday evening after spending 56 days in the game.
Her eviction came as a relief to most housemates as they really wanted her out because of her bossy attitude.

Only her love interest, Ghana’s Elikem, seemed touched as he shed tears soon after her departure.
For close followers of the show though, Pokello’s eviction was no surprise as she threw away a golden vote — a vote which was crucial for her survival in the show — the Nigerian vote.
For the greater part of her stay in the house, Nigeria and West African countries had thrown in their weight behind Pokello, but after she rubbished them, they stopped supporting her.
Two weeks ago, Pokello insulted West Africans after her countrymate, Hakeem Mandaza, had been evicted from the show.
She unknowingly thought Hakeem had been evicted because West Africans had overpowered his votes because they voted more than Zimbabweans and the SADC region.
Elikem warned her not to insult West Africans reminding her that she was in the house and had no idea what was happening out of the show.
Pokello did not budge, but she kept on attacking them and did not look apologetic.
Her local Facebook fan page administrators back home tried cleaning up her mess by apologising to West Africans on her behalf, but the damage had already been done. Only Ghanaians accepted the apology and kept voting for her for Elikem’s sake.
During her stay in the house, it was clear that Pokello had no idea who was responsible for saving her the four times she had been nominated and survived.
It seemed she thought the Sadc region was behind her, but in actual fact, besides the Zimbabwean vote, most of her votes came from West Africa (Ghana, Sierra Leone and Nigeria) because of her association with one of their own, Elikem.
Pokello though cannot wholly be blamed for overreacting when Hakeem was booted out of the game because most Zimbabweans have always believed that West Africans, particularly Nigerians, have better chances of winning the BBA show because of their higher population, hence Pokello’s derogatory remarks which cost her on Sunday evening.
On Sunday, Pokello needed at least three country votes to survive another week in the game, but unfortunately, she only had two and was evicted. Pokello received votes from Zimbabwe and Ghana. South Africa, which saved her last week, unfortunately, could not vote for her as their own housemate, Angelo, was also up for eviction.Advertisement

Had Pokello controlled her anger when Hakeem was evicted, she would have, maybe, bagged the usual Nigerian vote and landed at least three votes and bettered her chances of staying in the game.
But she fought a good fight considering that she resided with people she knew disliked her. Also, a lot of people thought she would not make it far, but she managed to last for two months in the house.
Sunday therefore marked the end of The Chase for Zimbabwe and Sierra Leone after their last representative, Bassey, was also evicted.
Angola, Malawi, and Uganda are also out of the game leaving 12 housemates, and nine countries in the chase for the US$300,000.
Pokello is expected back home on Wednesday.