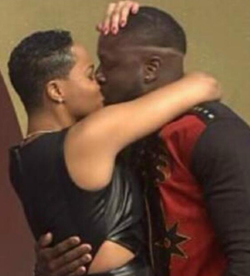 BIG Brother Africa’s Pokello Nare has tweeted her picture meeting her “mother in law” – new love interest Elikem’s mum!
The sexy Zimbabwean minx, 27, has been on cloud nine since the Ghanaian exited the Big Brother house as a finalist last Sunday, beaten to the US$300,000 top prize by Namibia’s Dellish Matthews.
And as Elikem did his rounds giving TV interviews in Johannesburg on Monday, Pokello was doing her best to convince his mum that she is the one for her son.
The Queen of Swag (@pokellosexxy) tweeted: “Spending the day with my mother in law #bliss.”
Millions of TV viewers watched on Sunday as Pokello and Elikem got lost in the moment when they were finally re-united following their brief romance on the show, before her eviction two weeks ago.
Cameras caught the two love-birds locked in a passionate kiss – and there was no separating them as they headed into the privacy of their plush Johannesburg hotel.
Hours later, Elikem used his own Twitter account to post a picture of the two, with Pokello – hands over eyes – dressed in a white night gown. Elikem appeared shirtless.
Pokello said in a separate tweet: “Ndochema here kana kuti ndoseka here? Mufaro wacho wandinyanyira hama dzangu! [I don’t know whether to laugh or cry, I’m having too much fun family].”
And in another tweet, she said: “@elikem_detailor I got u my nigga! Ride or die for u boo, Always!!”
Pals say Pokello is ready to travel to Ghana early in September to join Elikem, and may even be accompanying the Big Brother finalist on his home return.
Said a friend: “She is totally in love with Elikem and couldn’t wait to see him get out of Big Brother. She won’t be permanently moving to Ghana, but she wants to spend her best time with him.”

Getting to know each other … Pokello and Elikem’s mum, left, and with Elikem, right