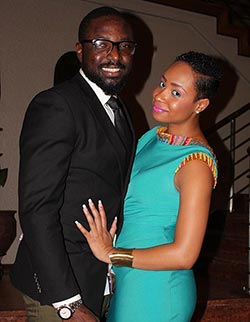 ZIMBABWEAN ex-Big Brother Africa star, Pokello Nare, told fans she was pleasantly shocked when Ghanaian boyfriend Elikem Kumordzie proposed live on television Saturday night.
The loved up West African popped the question live on TV as the couple were on stage presenting an award for Best collaboration of the year during the 2014 Ghana Music Awards.
Pokello accepted of course, but then took to Twitter with comments that have left many wondering where she has been.
In a post seen by the Herald newspaper, the Harare socialite remarked: “Unobva washaya kuti vaya vanovenga vanovengerei. Wozonzwa zvichinzi mahure haaroorwi.
“Asi wozoona ring ichipfekedzwa wobva wazvishaya.” (You wonder why there are haters. Some people say prostitutes do not get married and when you see someone getting a ring, you wonder!).
Twitter and Facebook users were quick to express their views, and not all of them were sympathetic.
Some dismissed the comments as a publicity stunt while others thought she was bing typically poxy, in the process revealing more than she intended about herself.
“We cannot surely be behind Pokello for these publicity stunts”, read one comment.
“There goes the watery-mouthed Pokello,” read another.
Some users of the social networking platforms wondered what Pokello was trying to say about herself.
“Once a prostitute always a prostitute,” read another comment.
“A wild animal cannot be tamed,” added Facebook user.
The couple’s love story started during their time on the Big Brother Africa reality TV show where they were housemates.
They would get even closer in the aftermath of the show, visiting each other’s home countries to meet their respective families and fans.
Prior to appearing on Big Brother Africa however, Pokello was in the media after an explicit sex tape of herself and an ex-lover, the musician Desmond “Stunner” Chideme, was leaked.
She would later publicly dump Stunner for Elikem.