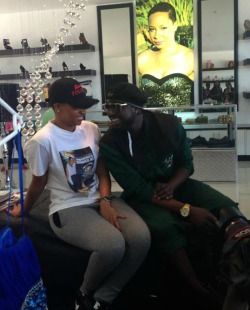 BIG Brother Africa (BBA) The Chase finalist, Elikem Kumordzie arrived in the country on Friday and was welcomed by beaming girlfriend Pokello Nare at Harare International Airport.
The Ghanaian, 24, was mobbed by scores of fans who were donning caps and t-shirts branded Polikem (Pokello+Elikem) while others held banners branded ‘Welcome Elikem’ and ‘Our mukwasha (son-in-law)’.
Some of the fans also had tape measures around their necks in apparent acknowledgment of Elikem’s profession as a tailor.
The Ghanaian was also handed an overall with President Robert Mugabe’s signature designed by Hovhorosi Style designers and he quickly changed into the outfit before being whisked away in a swanky Mercedes Benz vehicle.
‘‘Hovhorosi style” designer Herbert Huruva said Elikem was a big fan of President Mugabe and he came to know ‘‘hovhorosi style’’ through Pokello.
“We met with Elikem a day after he was evicted from the Big Brother House. He requested to have his hovhorosi because he loves the President and today he came wearing it all the way from Ghana,” said Huruva.
Pokello is expected to take her lover on a tour of the country to meet fans who supported them during their stay in the Big Brother house.
The Harare socialite, 27, dumped her ex, the singer Desmond Chideme aka Stunner, to be with the Ghanaian.
A leaked two-minute sex tape recorded with Stunner, whose existence she hinted to Elikem in the house, does not appear to have concerned the Ghanaian too much.Advertisement