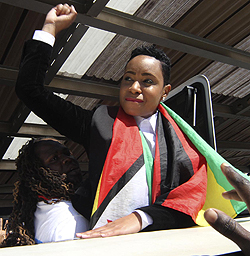 POKELLO Nare returned home on Wednesday to a rousing welcome at the Harare International Airport.
The former Big Brother Africa contestant, who was evicted from the show last Sunday, arrived home shortly after mid-day from South Africa.
Her son, Gerald, 10, was on standby to welcome her but conspicuous by his absence was her singer boyfriend Desmond Chideme, aka Stunner, who watched her frolic with Ghana’s Elikem on the TV show.
Dozens of cheering fans carried a big banner which said: “Welcome home Pokello – Zimbabwe’s true ambassador.” The banner also had a crown written “Queen of Swag”, which is Pokello’s nickname.
The 27-year-old socialite, who hit the headlines after a three-minute sex tape of her romping with Chideme leaked, was re-united at the airport with fellow housemate Munyaradzi Hakeem Mandaza who was evicted a fortnight ago.
She appeared to fight back tears at one stage, apparently overwhelmed by the support of her fans.

She was ushered into a white Hummer stretch limousine and driven to a Harare hotel.