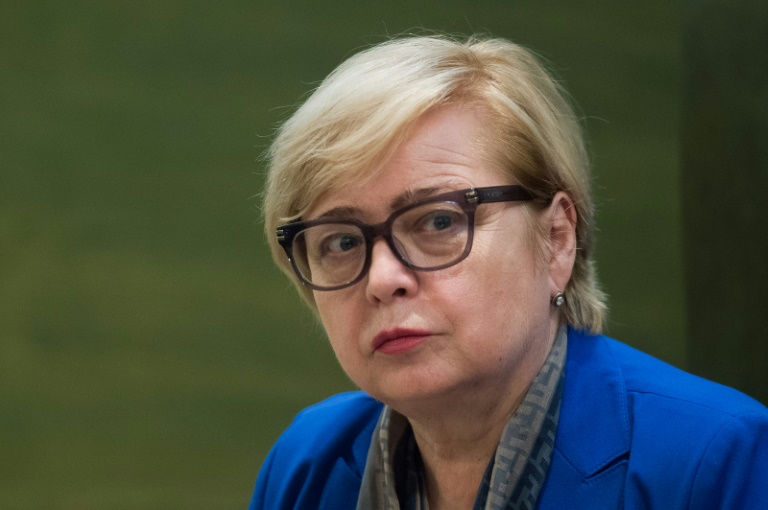 Poland’s Supreme Court chief justice was set for a showdown with the EU country’s president on Tuesday, vowing to defy controversial reforms pushed through by the right-wing government forcing top judges to retire early.

The European Union on Monday launched legal action against Poland, the latest salvo in a bitter battle over sweeping judicial changes that critics have decried as unconstitutional.

Chief Justice Malgorzata Gersdorf has branded the move a “purge” and vowed to reject any retirement notice that would cut short her constitutionally guaranteed six-year term.

She said she is due to meet President Andrzej Duda on Tuesday before the legislation comes into effect at midnight.

“What will I do? I won’t accept it. I feel I’m the Supreme Court chief justice until 2020,” Gersdorf told commercial broadcaster TVN24.

“Tomorrow there will be a purge of the Supreme Court conducted under the guise of retirement reform,” she later told law students.

Demonstrations in support of Gersdorf and other defiant judges are due to take place on Tuesday and Wednesday around the court’s offices in Warsaw.

Twenty-seven of the top court’s 73 judges are affected by the reform pushed through by the right-wing Law and Justice (PiS) government that brings down the retirement age from 70 to 65.

The government has refused to back down despite the EU action, insisting the changes are needed to tackle corruption and overhaul a judicial system still haunted by the communist era

Supreme Court justices last Thursday endorsed Gersdorf’s right to keep her post in line with a constitutional provision mandating a six-year term for the chief justice.

They also said that any justice who took up their duties before the day the new reform comes into force “should remain in their post until the age of 70, without meeting any additional conditions”.

Under the law, the affected judges can ask Duda to prolong their terms but he can accept or deny their requests without giving a reason. Sixteen judges have done so, according to Polish media reports.

The European Commission, the bloc’s powerful executive arm, said Monday that the changes would undermine judicial independence in Poland, breaching the country’s obligations under EU law.

Commission spokesman Margaritis Schinas said swift action was needed to “avoid irreparable damage to the independence of the Supreme Court”.

The Commission also said it took the view “that these measures undermine the principle of judicial independence, including the irremovability of judges”.

Poland has a month to respond to the commission’s formal announcement, the first stage of a procedure that could end up in the European Court of Justice (EJC), the bloc’s top tribunal.

Deputy foreign minister Konrad Szymanski said Monday the government would respond “in detail” within 30 days and warned that the ECJ would face a “very difficult task”.

“Its decision will be very important for the EU because it will define the extent to which EU law can interfere in the autonomy of member states in the way they organise their judicial systems,” Szymanski told AFP.

“All member states will follow (this case) with a lot of attention because we will be moving into unknown territory.”

The row comes after the EU launched hearings last week focused on Poland’s alleged violation of judicial independence over reforms to both the Supreme Court and the Constitutional Court.

European Commission Vice President Frans Timmermans has been leading discussions with Warsaw to try to find a solution but has said there has been no progress.

According to a nationwide survey carried out last month by Ariadna pollsters, 44 percent of Poles believe the PiS judicial reforms will increase political influence on the courts, while just 14 percent of respondents thought the contrary.

Tens of thousands of Poles have poured out onto the streets since the PiS took power in late 2015 to protest at the reforms.