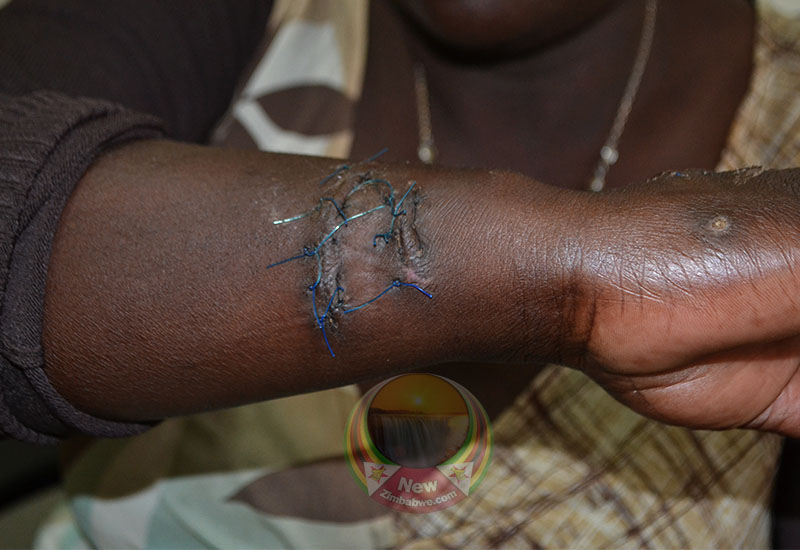 A woman from Harare’s Epworth suburb has narrated how she was recently brutalised for unknown reasons by a group of police officers whose colleagues have since blocked all her attempts to file a formal report over the abuse.

Yeukai Mapurisa, a vendor from the sprawling township, told NewZimbabwe.com Tuesday that the ordeal happened on the 2nd of December this year.

She says police armed with baton sticks pounced on residents in the area and indiscriminately assaulted everyone they came across.

“When the police arrived, I was at my workplace where I sell laptops and other gadgets,” she said.

“They jumped off their vehicles and started assaulting us, destroying our log cabins. They did not tell us why they were beating us.”

Mapurisa suffered severe injuries on her right arm and back.

As if the experience was not enough hell in itself, Mapurisa says all police stations she has approached to lodge her complaint have refused to entertain her attempts to file criminal charges against her assailants and have instead, referred her to other stations.

“I went to Sunway City to report the matter to the police station and I was told to go to Domboramwari where I was referred to Harare Central Police Station.

“The policeman who attended to me at Harare Central Police Station informed me that someone with a similar case had been arrested and further advised me to go to the hospital for treatment,” she said.

At Parirenyatwa Hospital, Mapurisa says she has incurred some medical bills which she was failing to settle.

Police spokespersons could however not be readily available for comment.

Cases of state brutality against innocent civilians are common in Zimbabwe with most victims choosing to suffer in silence.