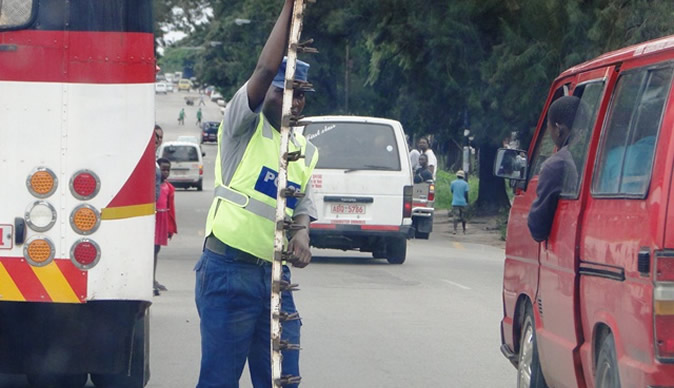 The ban follows public outcry after a Mutare police threw a spike at a moving commuter omnibus nearly two weeks ago, resulting in the vehicle overturning and killing four people.

Eight others were injured.

The police had  been using spikes to stop motorists from evading police checkpoints.

The act has killed people since they were reintroduced in the new dispensation.

ZRP Spokesperson, Assistant Commissioner Paul Nyathi, said any officer who will be caught offside will be punished.

“The commissioner general of police has, with immediate effect, banned the use of hand held spikes by any police officer whilst performing traffic enforcement duties throughout the country. Any police officer who will defy this directive will be arrested and face both criminal and stern disciplinary action,” Nyathi said in a statement Friday.

“No police officer will be allowed to move around whilst openly holding or carrying spikes under the guise of traffic enforcement,” said the police boss.

Nyathi said police commanders at various levels have been ordered to ensure that this directive is strictly complied with by police officers.

The ZRP will only stick to the use of standard and approved spikes as the norm, where these are strategically used at conventional roadblocks and checkpoints.

Nyathi said pirate taxis and road rules offenders will be traced if they flee from officers.

“This means that public service operators should be beacons of peace and law and order in all their activities,” he added.