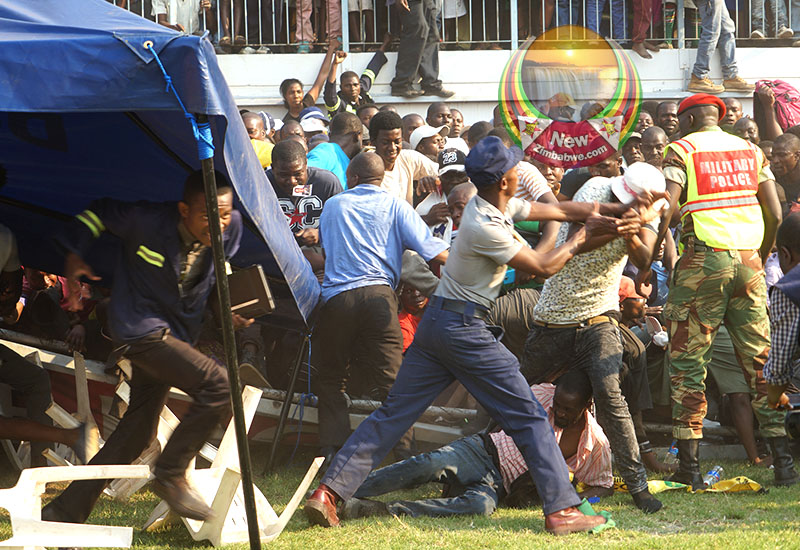 A Harare vendor arrested by police last week following a raid has died in custody allegedly due to police brutality.

Hilton Tafadzwa Tamangani’s body was riddled with purple spots where police baton sticks struck him during his arrest and detention at Harare Central Police Station. He was reportedly tortured together with 10 other vendors.

The 29-year-old Tamangani who had been denied access to medical assistance in spite of his dire situation was found dead at Harare Central Prison’s hospital wing, his Lawyer Argency Gumbo said.

Gumbo said Tamangani had to endure the pain especially on the night he was to pass on as the ill-equipped medical facility for inmates did not have painkillers to give him.

Two more inmates, one with a broken hand and the other with broken fingers, are still being denied access to health care.

“Hilton complained of severe pain yesterday (Friday) and was admitted in the Central Prison Hospital but those who were there could not do much in terms of assisting him medically.

“They indicated that they gave him a painkiller of some sort but his entire back had turned purple owing to blood clots,” said Gumbo.

News that Tamangani, father to a seven-year-old boy, had passed on was buzzing through social media Saturday with very little being shared of his last moments.

The 11 vendors were arrested after they allegedly beat up three unnamed police officers in Harare’s CBD a few metres away from opposition MDC’s Morgan Tsvangirai House headquarters.

Brother to the deceased, Terrence Bonde said it was clear that Tamangani had been murdered by the police.

“So far those who went to process his papers have been told to wait for a doctor who is in Bulawayo. They were told he will only be in Harare maybe on Monday with the postmortem scheduled for Tuesday.

“It is clear that he was murdered by the police.

“Our parents have accepted this as fate. What can they do!” said Bonde.

The police have maintained the 11 are MDC members and went on to cordon off the area around the opposition’s offices.

“He died while in the (ZPCS) custody, call them, they are best placed to comment on this,” said Nyathi.

ZRP is third on the list of institutions in Zimbabwe accused of torture, according to local rights watchdog, Zimbabwe Human Rights NGO Forum (ZHRNGO Forum).