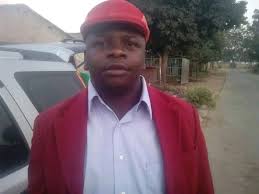 In a statement Saturday, police spokesperson Assistant Commissioner Paul Nyathi said law enforcement agents were yet to establish the cause of the official’s death.

The opposition activist was Friday morning found dead some four houses from his home.

Nyathi said the deceased had no struggle marks on his body except for unnamed valuables that were taken from him.

“Zimbabwe Republic Police (ZRP) is conducting investigations into the death of Lavenda Chiwaya in Karoi between 20th and 21st August 2020.

“Police are not aware of kidnapping and abduction allegations alluded to by some people on social media. Full scale investigations are in progress to find out what really happened,” said Nyathi.

However, police reported that emerging details were pointing to a murder “involving issues to do with girlfriends and alcohol abuse (kranco)”.

According to Nyathi, Chiwaya and a colleague, one Munyaradzi Pasipamire bought a roasted maize cob from a Tinashe Kanhema at around 1930 hours on 20 August.

The duo is said to have proceeded to buy two x 200 ml Challenger Whisky (kranco) before sharing the substance and the maize cob.

At around 2030 hours, Chiwaya allegedly left Pasipamire and Kanhema for his home but never reached his residence.

“The body of Chiwaya was found at number 1179 Chikangwe, Karoi whilst his residential address is 1171 Chikangwe in the same area.

The MDC Alliance on Friday told the media that Chiwaya was murdered by suspected state agents who were said to be stalking him in connection with the July 31 anti-government protests.

Said the police spokesperson, “We appeal to politicians to avoid premature statements and allow investigations to proceed smoothly.

“They should be careful in their comments as there are allegations of girlfriends and alcohol abuse issues which are now subject to police investigations in the case.”

Meanwhile, police have warned the public against interfering with crime scenes just like what happened in Karoi.