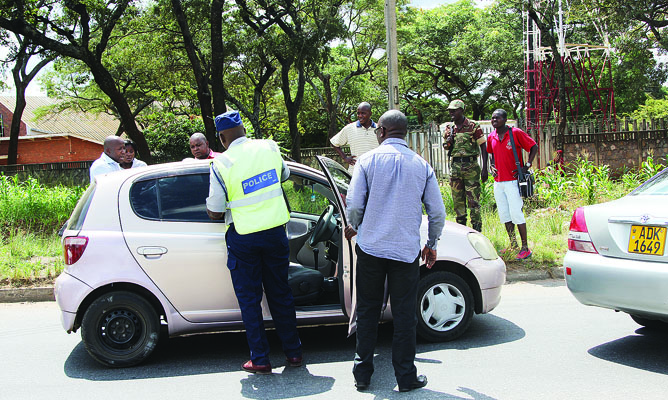 A CHITUNGWIZA woman on her way to give birth at a Belvedere, Harare clinic was on Friday forced to pay a US$5 bribe to pass through a police checkpoint mounted near Harare’s Showgrounds.

This was during heightened security following plans on the day by the opposition and civic groups to roll out street protests against high level corruption within government corridors.

Blessing Chadanyika, husband to Michelle Tirivangani, narrated how a group of police officers using a police Ford B-Car stopped them and ordered him to pay for his wife’s passage.

“Around 5am on 31 July, my wife started experiencing labour pains and we realised we had to rush her to the clinic the two of us had decided she would give birth at,” Chadanyika said.

“I left Chitungwiza in the company of a friend, Ryan, my wife and her mother. We were racing against time as I could see my wife was in pain.

“We were stopped by a group of police officers at the Showgrounds on our way to Belvedere along Bulawayo road who demanded to know where we were going and who we had in the car.

“I told them my wife needed urgent medical attention and also told them who the others were to which one of the officers ordered me to disembark.

“When I got out of the car, he started threatening me, accusing me us of being one of the anti-government activists but I maintained my story and then he demanded a bribe to let us go.

“I gave him US$3 and he laughed it off sarcastically and told me to add US$7 to make it US$10.

“I told him I could only add US$2 to make it US$5 as I had other expenses to face later on, so I gave him and he let us go.”

Chadanyika pleaded his innocence for his apparent participation in a crime of bribery.

“There was nothing else I could do, I was powerless and my wife was in pain, they won.

“What is scary is the thought of what could have happened if I did not have any money on me.”

Tirivangani eventually managed to reach the clinic and gave birth to a baby girl.

Cases of police officers and soldiers demanding bribes at checkpoints while enforcing the country’s Covid-19 induced lockdown have been on the rise during the current tense period.

NewZimbabwe.com has received similar cases of police officers and soldiers being bribed for safe passage into the Harare CBD by persons working for non-essential services at roadblocks along Bulawayo road and other high density suburbs.

Bribe money as low as US$1 suffice for one to earn passage.

Most police officers and soldiers earn amounts as little as $3 000 (US$30) per month.

President Emmerson Mnangagwa announced a strict lockdown period as a result of the Covid-19 pandemic with security forces maintaining heavy presence across the country’s highways, towns and cities from March this year.