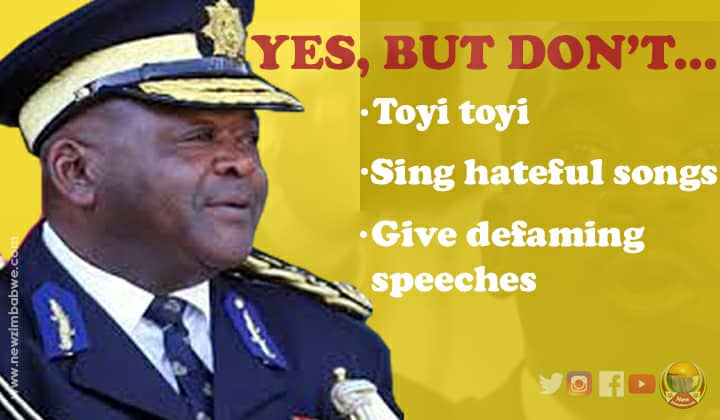 POLICE have finally given MDC the green light to proceed with its long-awaited 19th anniversary celebrations which the main opposition had intended to also use for a mock inauguration of party leader Nelson Chamisa as the “people’s President”.

The celebration is set for Harare’s Gwanzura Stadium on Saturday.

In a letter sent to the party Tuesday, police gave the MDC strict guidelines for the holding of the event while threatening to put down the festive meeting should the opposition decide to break the rules.

“You are expected to control behaviour of your political party members, before, during and after the celebrations,” reads the letter.

“…Your political party shall not intimidate passers-by and those who have nothing to do with your celebrations.

“… Your members should not be involved in toy-toying, convoying of vehicles of people chanting, singing and disseminating hateful and defaming speeches.”

The police letter continues, “Your marshals shall be dressed in a uniform that will make it easier to be identified by the police and a list of the marshals shall be presented to the officer who will be responsible for police security at your celebrations.

“…Any deviation from the above will result in police dispersing your gathering.”

Police further said event convenors, Rhino Mashaya and his deputy Amos Chibaya will be held accountable for any untoward incidents by party followers.

The MDC celebrations come after several attempts to hold the event were blocked by police who cited a blanket ban imposed on public gatherings in ostensible attempts to prevent the further spread of a cholera disaster that has killed at least 54 citizens since beginning of September this year.

Addressing a media briefing in Harare on Tuesday, Chamisa vowed to proceed with the party celebrations even without police permission.

The opposition chief was spurred by a recent Constitutional Court ruling striking off provisions of the Public Order and Security Act empowering police to block demonstrations at a passing whim.

Zimbabwe’s opposition says that the tough security laws were crafted to frustrate its activities and those of government critics.