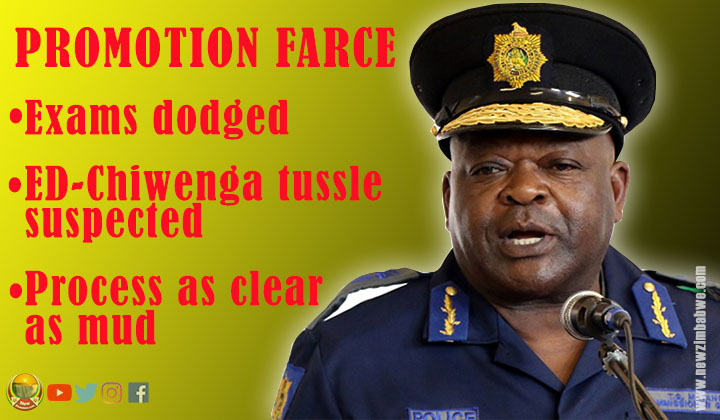 POLICE officers left out of recent internal promotions by the force have slammed their bosses for allegedly abandoning the normal examination processes to elevate their favourite individuals without any explanation.

Speaking on condition of anonymity, some police officers are also up in arms with the system for allegedly sidelining Ndebeles after the list of 56 (PROMOTIONS) selected individuals only has four Ndebele names in it.

While he has the powers to exercise the responsibility under Section 9 of the Police Act, police officers are usually subjected to annual promotional examinations to emerge with officers who merit elevation to higher ranks.

That exercise, it is alleged, has been circumvented without explanation, amid claims of a battle for control of the police force between President Emmerson Mnangagwa and his powerful deputy, Constantino Chiwenga.

“We do not know what criteria were used in determining who was suitable for promotion as we all woke up to be ambushed with a radio (memo) with a list of people we have no idea how they were found deserving of the top ranks.

“To make matters worse, this is the second promotional exercise this year where people have been handpicked for promotion outside the normal examination process,” said a senior Harare police officer.

Another officer from Bulawayo accused the police commander of exercising tribalism in picking individuals without exercising any due regard for the unwritten law of regional balancing.

“I only counted four Ndebele names from a list of 56. If this process was open to the usual competition through promotional examinations, we would surely not be having such an unbalanced selection criterion. I surely don’t know what they are trying to express in this,” said the police officer.

Reached for comment on Monday, police spokesperson Assistant Commissioner Paul Nyathi said he was not prepared to respond to questions on what selection criteria was used to come up with those who were promoted.

He referred NewZimbabwe.com to Senior Assistant Commissioner Charity Charamba whose mobile rang continuously without being picked.

However, in a statement soon after the promotions were made, Charamba said the exercise was done in accordance with the Police Act.

“The Commissioner General of Police Godwin Matanga would like to inform the nation that in terms of the Police Act, the President of the Republic of Zimbabwe has promoted senior officers with effect from the 7th December 2018,” she said.

Charamba said “the promotions are in line with the ZRP thrust of improving service delivery to the nation and the government’s policy of attaining a middle income economy by 2030”.

President Robert Mugabe’s shock ouster November 2017 has opened the arena for a fresh duel between his successor Emmerson Mnangagwa and Vice President Constantino, the former military boss who played power broker in the high stakes arrangement.

Mnangagwa has been busy with attempts to cleanse the system of the old Mugabe loyalists but has had to contend with his highly influential deputy who has a keen interest on who takes over the commanding roles within the country’s partisan security system.

Early this year, Mnangagwa fired 11 senior police officers through “retirements” but the number was increased to 32 in his absence by VP Chiwenga.

The President was forced to reverse the dismissals in early pointers to a rift in the country’s top governing corridors.