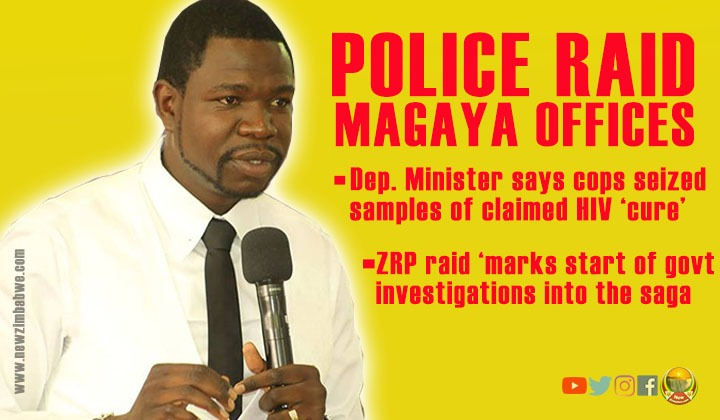 POLICE raided the Harare offices of prominent preacher Walter Magaya Wednesday evening to collect samples of his alleged cure for HIV and Aids, a deputy minister has confirmed.

Over the weekend, Prophetic Healing and Deliverance (PHD) ministries leader Walter Magaya claimed to have discovered a cure for HIV and AIDS.

Magaya said his herbal cure called Aguma would destroy the HIV virus in just 14 days, adding he was working with the government which was “taking his ‘cure’ through some laboratory tests to see if his claims were feasible”.

He also claimed to have engaged the World Health Organisation (WHO) for approval.

However, information minister Monica Mutsvangwa dismissed the claim, saying the preacher had not submitted Aguma for review and assessment as a herbal supplement.

“Medicines go through rigorous tests including clinical trials, which involve use of the product under strict medical supervision,” explained the minister.

“This is done prior to registration and the results are submitted to the medicines regulator as evidence of the effectiveness of a medicine.

And on Wednesday, the police, according to deputy information minister Energy Mutodi, raided Magaya’s offices to collect samples of the claimed cure.

POLICE RAID MAGAYA: I can confirm police this evening raided Prophet Walter Magaya offices to recover samples of his aguma medicine which he claims cures HIV. The raid marks the start of an investigation into this matter. Health experts say there is no cure yet.

“I can confirm that Magaya is assisting police with investigations in connection with enquiries the ZRP is currently conducting,” he said.

“It is the duty of the police to detect, investigate and prevent crime and this is precisely what we are doing.”

Meanwhile, the United Nations’ World Health Organisation (WHO) also weighed in on the saga Wednesday, insisting, in a statement, that there is no cure for HIV and urging those on antiretroviral treatment to continue taking their medication.

“There is no cure for HIV infection,” said Dr. Alex Gasasira, the WHO Representative to Zimbabwe.

“Effective antiretroviral (ARV) drugs can control the virus and help prevent transmission so that people with HIV, and those at substantial risk, can enjoy healthy, long and productive lives.

“The United Nations wishes to reaffirm that to date, there is no known and proven cure for HIV infection, but effective treatment exists to manage the infection through antiretroviral therapy and drugs.”

Dr Gasasira added; “Zimbabwe has very well-established procedures for clinical trials. Clinical trials are the process by which any new medical approaches including drugs are rigorously evaluated to determine whether they are safe and effective in the prevention and/or treatment of any ailments.

“The UN in Zimbabwe wishes to remind and encourage any researchers involved in developing possible new treatments for any ailments, including HIV and AIDS to subject these to the Ministry of Health and Child Care (MOHCC) national clinical trial processes and procedures.

“UN wishes to reiterate guidance provided by Health and Child Care ministry to all clients on antiretroviral treatment for HIV and AIDS to continue their prescribed medication.”

Magaya’s claims were also dismissed by various groups including the National AIDS Council (NAC) the Zimbabwe Medical Association (ZiMA) and the Zimbabwe Association of Doctors for Human Rights (ZADHR).

“NAC is not aware of any such clinical trials locally or globally that have been conducted showing efficacy in the management of HIV,” said Dr Magure.