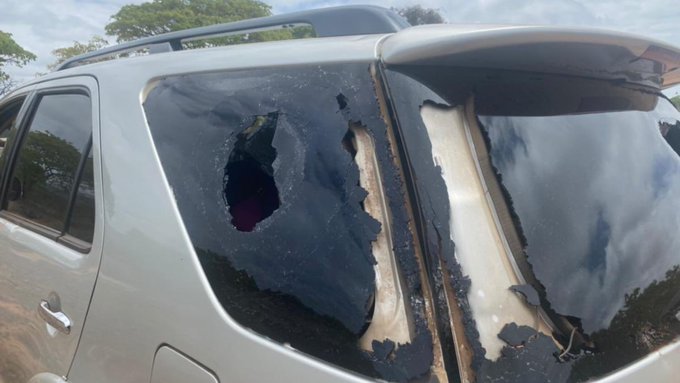 A vehicle that was part of MDC Alliance leader Nelson Chamisa's convoy that was damaged by Zanu PF activists this week in Charumbira, Masvingo
Spread This News

AN elections monitoring group, Election Resource Centre (ERC) says politically motivated violence in the country is on the increase and a cause of concern to the stability and development of Zimbabwe.

In a statement Wednesday, the ERC said reports of violence, at Zanu PF elections in most provinces and most recently in Masvingo where MDC Alliance leader Nelson Chamisa’s convoy was attacked, should be investigated by the police.

“ERC is concerned over the reports of recent incidents of politically motivated violence in Zimbabwe,” the ERC said.

“We deplore the incidence of violence at a Zanu PF provincial coordinating committee meeting in Mutare at Marymount Teachers College on October 9 and attacks of the MDC Alliance convoy between October 11 and 12, 2021 which included stoning cars, barricading roads with burning logs and assaulting members of the MDC Alliance and are certain that most Zimbabweans would wish to disassociate themselves from such acts.”

The ERC added: “Acts of intimidation and inter- or intra-party-political violence should not be tolerated in a democracy, and those responsible for instigating such violence should be brought to justice.

“In this regard, we call for political parties and their leaders to conduct themselves peacefully. There must be a full investigation of incidences of violence and all those found responsible must be held accountable,” read part of the ERC statement.

The ERC also urged political parties to stop using provocative language, misinformation, and falsehoods that only promote political tensions, divisiveness, and violence to promote the freeness, fairness, and openness of the political and electoral environment.

“We call on all parties to respect the democratic principles that are set out in Zimbabwe’s Constitution, and which will contribute to a peaceful, just, and democratic society. Through these principles, a broader peaceful electoral environment can be achieved by contributing to a level playing field for all.

Meanwhile, the ERC has recommended that all political party leaders must publicly condemn violence within their party structures, refrain from perpetrating violence and instigating violations of human rights, ensure the protection of the rights to human dignity, personal security, and freedom from torture, or cruel, inhuman, or degrading treatment or punishment as enshrined in sections 51 to 53 of the Constitution of Zimbabwe.