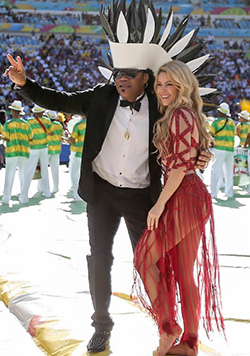 VLADIMIR Putin chatted with Angela Merkel, and David Beckham hugged Pele at the World Cup final on Sunday.
Tom Brady looked on from the VIP seats when his wife Gisele Bundchen brought the trophy on the field before the game.
Mick Jagger and LeBron James were also in the Maracana Stadium to see Germany beat Argentina 1-0 in extra time.
Celebrities rubbed shoulders at the stadium, starting with Shakira singing and Carlos Santana playing guitar during the closing ceremony.

At the final whistle, German chancellor Merkel jumped from her seat and raised both arms in triumph.
Merkel turned to her right and was kissed on both cheeks by Brazil state President Dilma Rousseff.
Russia’s President Putin and FIFA President Sepp Blatter were next in line with congratulations.