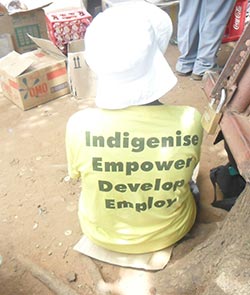 THE ruling Zanu PF party’s campaign regalia for last year’s general elections remain popular around the country, almost a year after the vote elections.
While many wear the material because they do not have the money to buy anything else, in some cases the regalia helps ensure one’s physical safety in politically tricky situations and environs or easy passage at road blocks if you are a Zupco bus driver.
Inscribed with the party’s election theme (Indigenize, Empower, Develop, and Employ) the regalia – including T-shirts, caps and wrapping cloths (Zambias) – appears to be the dressing of choice at every social gatherings in rural areas.
Its visibility is more pronounced at funerals, community meetings, church gatherings and even weddings.
The material is so abundant in rural areas that a visitor would be forgiven to think that it is now the country’s de-facto national attire, although most of the T-shirts and caps have now faded as a result of over use.
Last week Newzimbabwe.com attended a funeral in rural Chimanimani where almost half of the mourners were putting on the attire.
“When I am wearing this T-shirt and cap I feel secure and safe because I am portrayed as a Zanu PF supporter and no one harasses me, even though I might be a supporter of another party,” says Malvern Tuwi, a villager from Biriwiri area in Chimanimani.
A Zupco bus conductor, Knowledge Moyo, said he has six T-shirts which he was given by Zanu PF youths in Mbare who were campaigning for Tendai Savanhu, the Zanu PF Member of Parliament for the area
“All of our bus crews do not wear anything except ‘maT-shirts emudhara’ which protect us from the police at roadblocks.
“Whenever the police see us in these T-shirts, they let us go because they think we are Zanu PF or President Mugabe’s supporters,” said Moyo.
However, even though some are using the attire as a political and protection tool, others are wearing material because they cannot afford to buy new clothes.
“I have four T-shirts and two caps which I was given when we were campaigning for Munacho Mutezo the Zanu PF legislator for the area.
“The regalia have become part of my every day attire because I cannot afford to buy brand new clothes,” said a Zanu PF youth who refused to be named.Advertisement

Another source in the area also told Newzimbabwe.com that some party officials were using the regalia as payment for menial jobs such as crop-harvesting and land tillage.
“Many corrupt officials who were in charge of the regalia distribution were hoarding it for personal benefit,” alleged another villager.
China, Zanu PF’s much-touted all-weather friend, is believed to have funded much the campaign material which also included branded house hold utensils such as plates and pots at a cost of approximately $1,7 million.
During the run-up to the elections, police officers and their families at Chikurubi Police Support Unit Camp turned riotous as they scrambled for the regalia which were being distributed by the loosing Zanu PF Harare East candidate Noah Mangondo.
It took police water cannons to disperse the scrambling officers and families, as some of them broke into fist fights over the regalia.