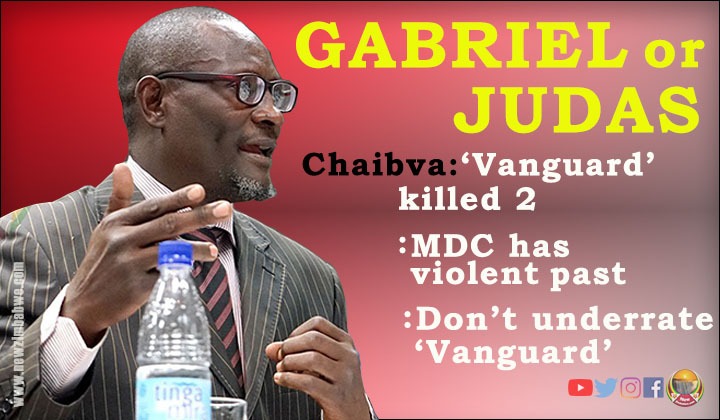 Chaibva was making submissions before the Kgalema Motlanthe chaired Commission of Inquiry into the violence that rocked Harare’s CBD soon after the July 30 elections.

The disturbances led to the shock gunning down of six civilians by what is widely believed to be soldiers who were deployed to quell the violence.

“It is my consideration that the events of the 1st of August 2018 were clearly engineered by the MDC to produce the kind of result that it had.

“They were not looking for anything short of dead bodies and they thought they would cause a lot of violence,” said the now leader of the Free and Fair Foundation.

Said the founding MDC legislator for Harare South, “As a foundation, we were able to account for the death of three people, our informant says he was there.

“The MDC youths had a pistol. These youths, in their excitement, were taking turns to fire the pistol and it accidentally discharged and shot two of them and they quickly grabbed them, took them to Parirenyatwa (hospital) and dumped them there.”

Chaibva broke ranks with the then Arthur Mutambara led MDC faction following a storm over his controversial decision to attend then President Robert Mugabe’s inauguration after a violent and strongly disputed poll 2008.

He immediately became a ready resource for state media journalists who were seeking for comment on the main opposition’s shortcomings with the excitable businessman often using the free television airtime to excoriate his former allies.

Chaibva then went into a somewhat lengthy media hiatus only to return Tuesday to claim the MDC Vanguard was a reincarnation of another former party militia group christened the “Democratic Resistance Committee (DRC)”.

“Unknown to us, sometime in 2002, the MDC had formed what they called the Democratic Resistance Committee (DRC), a group that was being trained militarily and soon some white farmers began to share spaces on their farms to train these youths and this training was being led by Roy Bennett (late ex-MP),” he said.

“The DRC that I have talked about has morphed into the Vanguard. Anyone who underestimates the nature of the militancy of the MDC does so at their own peril.”

The MDC however denies this with party youth assembly secretary general Lovemore Chinoputsa Tuesday saying the controversial group was “peaceful” and was disbanded just before the July 30 elections.