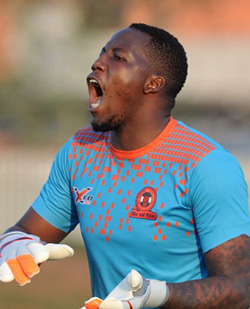 SOUTH Africa: Polokwane City goalkeeper George Chigova is optimistic that next season will be just as good as the 2016/17 campaign.
Rise and Shine finished sixth in the domestic league and will play Cape Town City in the MTN8 quarterfinals next month.
Chigova played in all 30 league matches during the season, but missed out on playing 90 minutes in each game after he was injured and replaced by Harold Ndlovu in the 3-2 win over Highlands Park back in September.
Only two players played the full 90 minutes in all 30 league games during the season. One is Chigova’s teammate Thabiso Semenya, the other Bloemfontein Celtic left-back Mthokozisi Dube.
“It was a very good season for me, because remember I also won the COSAFA Castle Cup with my national team,” the Zimbabwean tells KickOff.com.
“I’m very happy with the way things have been going for me, especially because I had come from SuperSport United where I didn’t play.
“I played all the games for Polokwane last season and I’ve done well with the national team. I can’t ask for better as a player.”
The 26-year-old joined the Limpopo side in July 2015.Advertisement