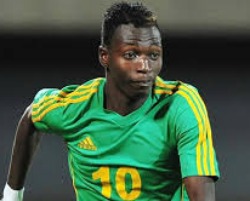 POLOKWANE City are believed to be closing in on Zimbabwean forward Walter Musona, who is the younger brother of former Kaizer Chiefs striker, Knowledge Musona.
The young forward, who is on the books of Zimbabwe’s FC Platinum, had a successful 2016 with impressive performances for his club.
Apart from scoring 10 goals last season, Musona was nominated for the Zimbabwe Premier Soccer League Soccer Star of the Year award.
Musona is currently in South Africa with his Zimbabwean team, as part of their pre-season preparations.
The team has a friendly game lined up against Mamelodi Sundowns, which is scheduled to take place in Rustenburg on Saturday.Advertisement