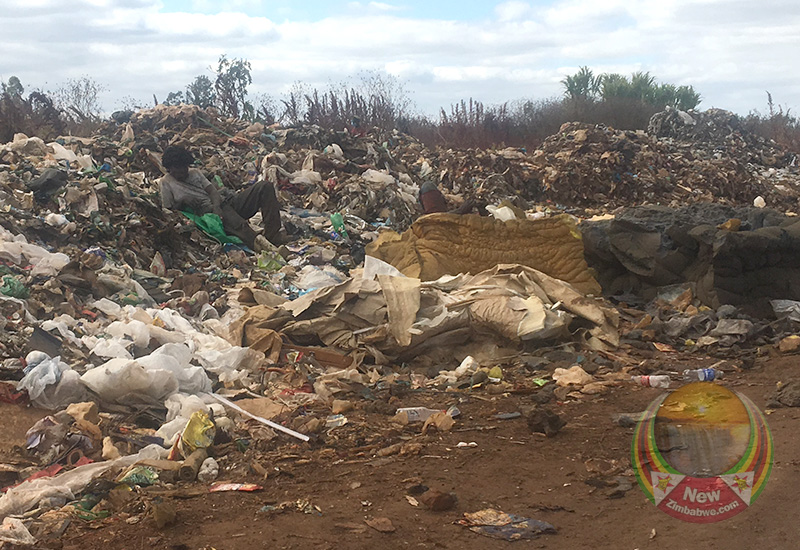 THEY earn US$3 a day and have to make do with that little for their daily needs and those of their families strewn across capital Harare, or nearby peri-urban areas.

Though their reeking stench, as a result of hours upon hours of digging for recyclable waste at the Pomona dumpsite might discourage one from interacting with them, they are actually like every other folk battling to make a living in Zimbabwe.

Despite the dumpsite occupying a very important place in their survival, especially for some who have been there for over three decades, their knowledge of Harare City Council and Geogenix BV’s protracted battles around it, is very minimal. They are ignorant their days benefitting from the trash are numbered.

When everyone else is concerned about the controversial millions that have been ‘earmarked’ for the waste-to-energy plant set to be constructed there, their only hope is they will be allowed to continue trading.

Numbering over 500, they call themselves “pickers.”

They told NewZimbabwe.com the Netherlands-based company, currently in ownership battles for the site, should consider them for whatever employment opportunities that arise, failure of which they might commit to a life of crime.

“This is where we survive from, if they ignore our pleas how do they expect us to survive. They want us to turn to a life of crime. They want us to jump over precast walls and break into other people’s homes to irk out a living?

“It is in such times that God should step in, how does He expect that we survive. Is this God? We cannot leave this place; we are in Zimbabwe so where would they expect that we go?

“We are here because we do not want to steal. These people have never talked to us, they are just doing what they are doing without our input,” said one of the emotionally-charged pickers.

The pickers at Pomona have already been stopped from selling ‘their ware’ to waste management companies. Vehicles that used to buy from within the site have also been barred.

“We are living in fear of losing everything. At the moment we hope they will allow us to sell what we have picked because they are now treating us like slaves in our own country.

“We make between US$3 and US$5 which is what is keeping our families and mothers alive,” added another who has been picking waste for 35 years at Pomona.

Geogenix BV general manager, Enea Murataj, is confident the project will employ 300 people, a far cry from those surviving on the waste there. More stay at the site in dark, dirty plastic homes most would prefer not to enter.

“We are targeting to employ more than 300 people in the first five years of initial inception of the project. Harare will become part of global circular economy where nothing goes to waste and there will be reduction in leeching from wastewater and air pollution, contributing to making Harare a world class city by 2025,” said Murataj.

The US$344 million project started on controversial footing, with Local Government Minister, July Moyo, allegedly arm-twisting council into accepting it.

Norton legislator Temba Mliswa claimed, in Parliament, Moyo was getting a 10% kickback from the shady deal.

Council is expected to pay an average US$22 000 daily to the supposed investor, an issue that has further raised stink over the deal.

Combined Harare Residents Association (CHRA) described it as ‘scandalous’, Harare mayor Jacob Mafume said ‘it stunk to high heavens’, but the parent ministry maintained it will go ahead.

Pomona dumpsite pickers have become the unknown, first victims of the current impasse between council and Geogenix BV and while their concerns might be equally important, their ‘unnatural’ type of survival could be used as a reason to ignore them.

US$3,5 million will be paid by Harare city council if it fails to honour its end of the bargain according to Geogenix BV local representative and Mnangagwa ally Delish Nguwaya.

He expressed confidence council will pay ‘because it signed.’