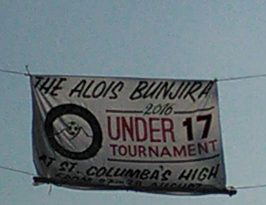 HONDE Valley: This year`s Alois Bunjira Under 17 tournament was not a success story after most local teams failed show up for the event.
The former Caps United and Zimbabwe national team player bankrolls an annual Under 17 tournament in Honde Valley as a way to helping nurture talent at grassroots level.
But this year, Bunjira said he was disappointed after only three out of 16 local teams which had confirmed participation pitched up.
The two-day event was held at St Columbus High school.
Bunjira said the tournament was meant to benefit locals in his home area of Honde Valley.
The teams which participated include La Sakubva (Mutare), Redwing Mine FC (Mutare), Caps Birchenough (Birchenough), Bunjira`s Alban Academy (Harare) and while, Mparutsa, Sahumani, St Columbus were the only local teams that took part.
“I was very disappointed because 16 local teams confirmed their participation but only three local teams came,” said Bunjira.
“There was no feedback from the teams’ representatives. This is my home area and I feel I need to plough back into my community and local teams should participate fully,” he said.
The teams were put in two groups with Group A comprising Mutare’s representative La Sakubva together with Sahumani, St Columbus and Mparutsa. Group B had Caps Birchenough, Alban and Redwing mine.
Alban Academy won the tournament while La Sakubva were runners up.Advertisement