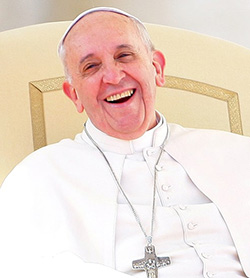 Pope Francis, “Wake Up!” (Believe Digital)
He’s a global pinup who fills stadiums and thrills fans. And now Pope Francis has released what is, essentially, a rock album.
He doesn’t sing, but the pontiff who has energized millions of Roman Catholics with his vision of a compassionate, socially committed church lends his voice to an album of spiritual spoken-word Euro-rock.
“Wake Up!” mixes excerpts from the pope’s speeches, homilies and prayers with Christian hymns that have been reworked by modern composers to include dollops of everything from Gregorian chant to rock guitar.
Francis’ words — in Spanish, Italian, English and Portuguese, with a booklet providing translation — touch on key themes of his papacy: youth, the environment, the joy of faith and the degrading effects of consumerism.
The musical settings take in Pan pipes, sinuous beats and a veritable tsunami of synth. It’s a bit of a hodgepodge and clearly the work of many hands, with credits for more than half a dozen composers and arrangers as well as artistic director Don Giulio Neroni.
The mix is at its most arresting on the lead single — yes, Francis is a pope who releases singles — “Wake Up! Go! Go! Forward!” The track sets the pope’s exhortation to embrace “the beauty of holiness” amid wailing guitar licks and rousing trumpet bursts.
If that sounds odd, it is. At times “Wake Up!” feels like a 1980s middle-of-the-road rock album interrupted by soft-spoken spiritual musings. But while it’s not always a heavenly mashup, it’s a heartfelt offering that should burnish Francis’ image as the people’s pope.Advertisement