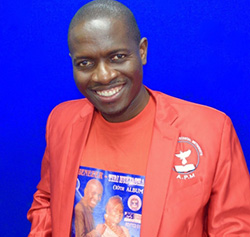 POPULAR gospel hit ‘Ebenezer’ by high riding Zimbabwean Reverend Togarepi Chivaviro recently clinched the Best Collaboration song in Africa gong at the Trumpet Africa Gospel Awards 2016.
The song was nominated in two categories – Best Traditional Gospel and Best Collaboration.
The awards ceremony was held in Pretoria State Theatre South Africa last weekend.
‘Ebenezer’ faced competition from other releases by Celebration Centre Choir Bonnie Deushle (Zimbabwe), Yahweh Wumi and Victizzle (Nigeria), Benachi and Kaberere (Kenya).
Speaking to this publication from South Africa, a joyful Chivaviro said Ebenezer had surpassed their expectations.
“Being nominated for two Awards is one level, but winning one of them is, for us, a higher level of God’s grace.,” he said.
“Performing before such a fully packed audience with dignitaries and celebrities from across Africa was a high achievement for us, especially when the hall resonated with everyone singing along to Ebenezer.
“We were totally overwhelmed by the magnitude of the event, so many Zimbabweans came to support us including official from the Zimbabwean embassy in South Africa.
While performing on stage, Chivaviro was ably supported by fellow Zimbabwean musicians Rumbi Zvirikuzhe, Tatenda Mahachi, Tyra Chikocho, Zet Mndluli, Sandra Chirenje, Prosper Mateva and Alpha Ngoni.
But Chivaviro said it was ironic that, while ‘Ebenezer’ still continues to fly high on the continent, it has never been nominated for any major Zimbabwean music awards.
“God has his own ways; we give Him all the glory,” he said.
Meanwhile, other notable winners were popular South African gospel singer Rebecca Malope who won the Best Female award and Uche Best (Gospel Song).
Shongwe and Kuphuka won Best Traditional Award (Swaziland) while Soweto Gospel Choir claimed the Best Group Award.Advertisement