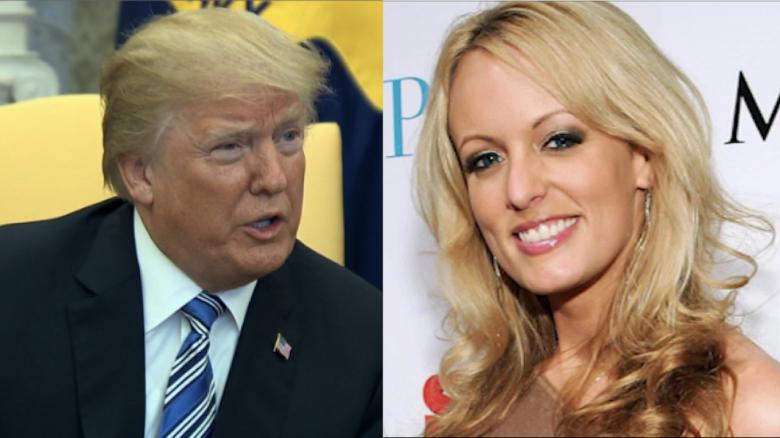 Los Angeles lawyer Michael Avenatti filed a lawsuit on behalf of Daniels on Tuesday seeking to toss out the confidential settlement she signed just days before the November 2016 election.

Avenatti made the rounds of the morning talk shows on Wednesday to explain the legal move by Daniels, whose real name is Stephanie Clifford.

“She believes it’s important that the public learn the truth about what happened,” he said. “I think it’s time for her to tell her story and for the public to decide who’s telling the truth.”

White House spokeswoman Sarah Huckabee Sanders was asked about the allegations at the daily press briefing and noted that Trump has denied them.

“The president has denied the allegations against him,” Sanders told reporters.

“The president has addressed these directly and made very well clear that none of these allegations are true,” Sanders said. “Anything beyond that I would refer you to the president’s outside counsel.”

As part of the lawsuit filed with a California court seeking to declare the non-disclosure agreement null and void, Avenatti released a copy of the settlement.

It shows that Daniels received a $130,000 payment from a company known as Essential Consultants LLC in return for her silence.

Using the pseudonyms Peggy Peterson and David Dennison, Daniels and Trump were to sign the agreement, along with Essential Consultants.

But Trump never signed it, providing the basis for Avenatti’s attempt to have it thrown out and release Daniels from her obligations.

“It’s our position that the entire agreement is null and void because he did not sign it,” the lawyer told the “Today” show.

“I think she may have to and she’s prepared to do that,” Avenatti said.

The lawsuit alleges that Daniels began an “intimate relationship” with Trump in the summer of 2006 and that it continued well into 2007.

After Trump won the Republican Party nomination for president in 2016, Daniels sought to share details of their relationship with the media, it said.

Trump’s attorney Michael Cohen “aggressively” sought to “silence Ms Clifford as part of an effort to avoid her telling the truth, thus helping to ensure he won the presidential election,” the document says.

On October 28, 2016 — two weeks before the November 8 presidential election — Daniels and Essential Consultants signed the confidential settlement agreement but not Trump.

Cohen claimed last month he had paid Daniels $130,000 from his personal funds but declined to explain why he made the payment or if Trump was aware of it.

Avenatti said Wednesday he was convinced Trump was aware of the payment.

“There’s no question the president knew about it at the time,” he said.

“The idea that an attorney would go off on his own without his client’s knowledge and engage in this type of negotiation and enter into this type of agreement quite honestly I think is ludicrous,” he said.

Cohen’s comments came after the watchdog group Common Cause filed a federal complaint in January arguing that the payout may have violated campaign finance rules.