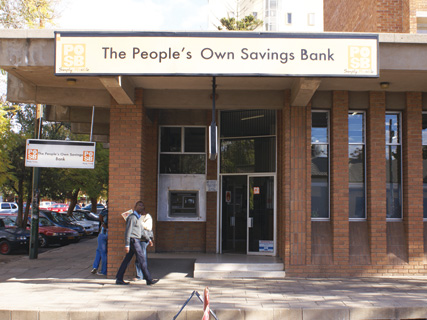 HARARE: The People’s Own Savings Bank (POSB) on Wednesday paid a $2 million dividend to its sole shareholder, the government, after recording a five fold jump in net profit to $7,6 million for the full-year to December 2015.
POSB chairperson Matilda Dzumbunu said the bank had adopted a new policy under which it would pay at least 25 percent of its net profit to government as dividends, with the remainder being invested in operations.
Finance Minister Patrick Chinamasa received the cheque on behalf of the shareholder, lauding the bank for its “good work.”
A combination of effective cost management, revenue growth initiatives and deposits mobilisation accounted for the improved profitability, bank officials said.
POSB managed to contain non-performing loans which averaged 10.8 percent.
Chief executive Admore Kandlela said a capital injection of $20 million by the shareholder in the last quarter of 2015 had helped stabilise the bank, oiling it to improve its performance.
“We are happy that the bank was capitalised,” Kandlela said at the institution’s second annual general meeting.
“This increased our capital to $33 million which is above the central bank’s requirement.”
Kandlela lamented stiff competition in the banking sector for low-end clients, which had for long been the institution’s forte.
“We are experiencing many challenges in terms of retaining customers,” said Kandlela.
“Everyone is now targeting the low income market but we have so far managed to retain 99.3 percent of our customers.”
Chinamasa said government would continue to support the savings bank to ensure that it grows and play a pivotal role in supporting financial inclusion.
“Of all the banks, you are a good example of financial inclusion because of your extensive branch network,” he said.
The Minister cautioned the bank against extending loans to non-executive directors, warning this would compromise their ability to effectively play their oversight role.
This came after it was disclosed the bank was owed $1,4 million in outstanding loans by former directors.
“This should be discouraged if not stopped at all,” he said. In response, Dzumbunu said the new board, appointed in September last year, “fully discouraged” the practice.
Chinamasa praised the bank for allowing the media to sit out through the annual general meeting as this promoted “transparency and accountability” in the manner in which affairs of the bank are held.Advertisement