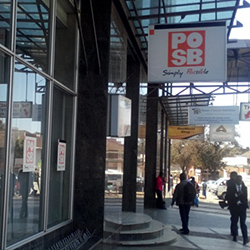 HARARE: The Reserve Bank of Zimbabwe (RBZ) says it has fined the state-owned People’s Own Savings Bank (POSB) $500,000 — the equivalent of 6 percent of its 2015 net profit — after the bank’s employees leaked images of bond notes before their official introduction on Monday.
The workers implicated in the leak have also been dismissed, the central bank said.
After six months of uncertainty, the central bank announced on Saturday that the bond notes — a local currency designed to ease a biting US dollar shortage in unofficially dollarised Zimbabwe — would be introduced on Monday, along with details of their security features. But images of the currency in a bank vault surfaced on social media platforms before their official launch.
In a statement issued late on Monday, the RBZ said the POSB had violated provisions of the Banking Act.
“POSB unlawfully and without permission, took images of bond notes in its vaults and distributed and publicised the images via social media,” the RBZ said in a statement signed by governor John Mangudya.
“POSB has thus abused and breached the confidentiality and secrecy it was enjoined to maintain in respect of the information and material provided to it by the Reserve Bank in the performance of its functions.”
The central bank said the offence committed by POSB was serious as it “impacted negatively on the integrity and reputation of the Reserve Bank and caused unnecessary anxiety and discomfort in the market.”
The RBZ said it had met bank CEOs on November 25, a day before it announced Monday’s launch of the new currency, to emphasise the need for discretion in handling the introduction of the bond notes.
“The Reserve Bank…has imposed an administrative fine of $500,000 on POSB. The employees of POSB who took, publicised and distributed the images on social media have been dismissed with immediate effect,” the RBZ said.Advertisement