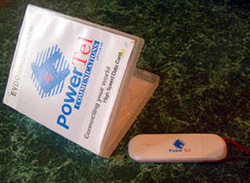 CONVERGED telecommunications operator, Powertel, says it is ready to roll out mobile network services in the new year.
Prosper Mutswiri, Powertel’s marketing manager told The Source that the firm, which previously provided internet solutions only, had made great strides in establishing voice services with interconnection agreements having been reached.
“This has always been Powertel’s objective to offer total telecommunications solutions to Zimbabwe and Africa at large,” he said in emailed responses.
Powertel was this year granted a converged telecommunications licence by the Posts and Telecommunication Regulatory Authority (Potraz) to provide both internet and voice services, he added.
“To keep up with competition, you also need to be innovative hence we are not diversifying as such but we are moving fast to fulfil the set objectives of the business as outlined on its formation,” said Mutswiri.
Zimbabwe, with a population of 13 million, has a mobile penetration of over 104 percent across its three network platforms.
Latest Potraz data shows that Econet Wireless has 8,5 million subscribers, Telecel 2,54 million users and state-owned NetOne 2,45 million subscribers.
Mutswiri said Powertel understood its competition and “was ready to offer affordable and quality services to Zimbabwe”.
Powertel is a subsidiary of Zesa Holdings.Advertisement