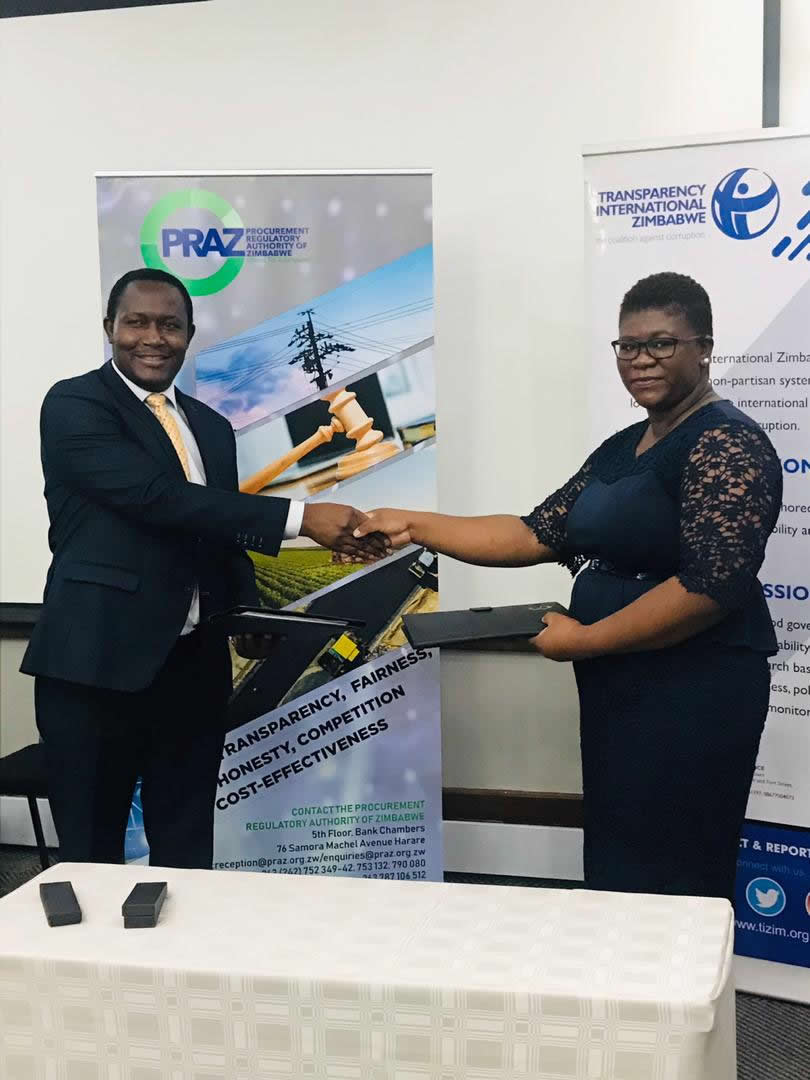 THE Procurement Regulatory Authority of Zimbabwe (PRAZ) has entered into partnership with Transparency International Zimbabwe (TI-Z) which will see the two organisations exchanging notes and strengthening the country’s procurement systems.

The development comes at a time the country’s public procurement systems have been criticised for corruption leading to revenue losses, delivery of overpriced substandard goods and services, among other malpractices.

For the past five years, the TI-Z Corruption Perceptions Index has perceived Zimbabwe as a very corrupt country, and the Ibrahim Index of African Governance (IIAG), which measures governance, also ranked Zimbabwe 39th out of 54 countries in Africa on governance issues.

In a bid to minimise corruption PRAZ and TI-Z Thursday forged a Memorandum of Understanding which will see the due establishing a collaborative relationship and involving training sessions, sharing of information including corruption trends and drivers, expertise, finding and implementing solutions to enhance fiscal transparency and counter corruption in public procurement.

“This signing ceremony fulfils the Power of the Authority outlined in PPDPA Act [Chapter 22:23] Section 7 (d) which is to co-operate with other organisations, whether inside or outside Zimbabwe, in the exercise of its functions,” said Ruswa.

He said PRAZ engaged TIZ to be a collaborating party in its efforts to enhance mechanisms that will combat public procurement related corruption, ensure that public procurement and disposal of public assets was effected in a manner that was efficient, fair and transparent.

Ruswa added that the agreement fulfils the underlying principle of the PPDPA Act of transparency, fairness, honesty, cost-effectiveness and competition which resonates with TIZ’s independent mandate of fighting corruption in Zimbabwe.

Also speaking at the occasion, TI-Z executive director, Muchaneta Mundopa said corruption around public procurement has been accelerated by the Covid-19 pandemic.

“The infamous Covid-19 scandal in Zimbabwe served as an eye-opener for key stakeholders in both the public procurement sector and the anti-corruption sector to join forces and call for integrity and fiscal transparency,” she said.

Mundopa added that the MoU will go a long way to address corruption risks and vulnerabilities within the public procurement value chain.