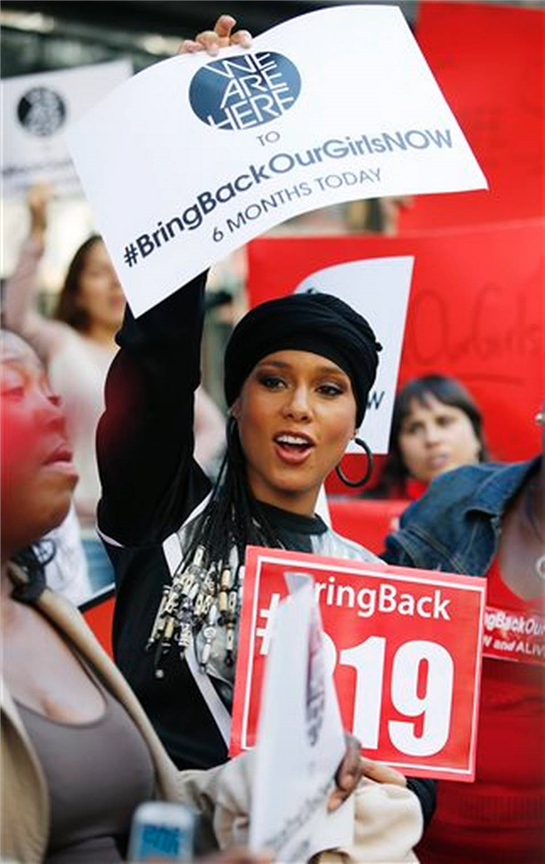 ALICIA Keys held a protest in New York City on Tuesday to raise awareness about the 200-plus Nigerian schoolgirls who were kidnapped by Boko Haram militants in April.
Tuesday marked six months since the girls were abducted. Keys kicked off a protest with 30 others at the consulate general of Nigeria, holding signs that read “We Are Here” and “Safe Schools Now!”
They chanted “Bring back our girls” and “When do we want them? Now! Now! Alive!” as New Yorkers walked up the street during lunch hour, while others stopped to capture photos and video.
Keys, who is pregnant, said in an interview that she felt touched to take action because she is a mother. Her son, Egypt, turned 4 on Tuesday.
“Today is my son’s birthday and it is also making me stand in solidarity with all the mothers of the Chibok girls who have been abducted for six months and are still missing. And it is just outrageous that that’s going on,” the 33-year-old said as others chanted behind her.
Keys recently launched the movement “We Are Here,” which fights for social justice. She also recorded and released a song with the same name.
She was joined by her husband, producer-rapper Swizz Beatz. She said people need a reminder that the schoolgirls are still missing.
“Some people have even told me they’ve heard things about ‘there’s been progress,’ but there hasn’t been progress because the girls aren’t back,” Keys said.
“So I think that we get mixed information. We don’t know, so we just have to keep being made aware of what’s happening.”