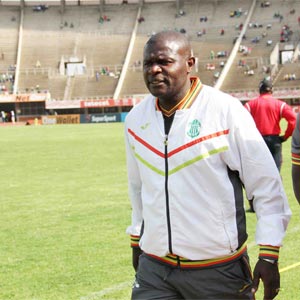 CAPS United will be without five key players on Sunday, when they host Triangle at the National Sports Stadium in a league match.
Fullbacks Hardlife Zvirekwi and Ronald Pfumbidzai are with the national team in Namibia at the Cosafa Cup, while Archford Gutu, Tafadzwa Rusike and Captain Moses Muchenje are out injured.
But coach Lloyd Chitembwe is not worried about the absence of his key men and believes they can upset Triangle with the material at his disposal.
“These guys are important to the national team and obviously they are important to us as well. I am not going to cry about their absence even those who are injured,” Chitembwe said.
“We believe in those players who are available to do the job for us. We will just have to deal with what is there. It is not going to be an easy game for us. Not at all.
“Look at Triangle, their technical team has great minds in Yogi (head coach David Mandigora) and Biggie (Zuze). Such a team deserves a lot of respect.”
The Harare giants are this season considered serious title contenders and are on position three on the log with just three points behind leaders FC Platinum.
They face a Triangle side which is also within shouting distance of the league title with five points below FC Platinum.