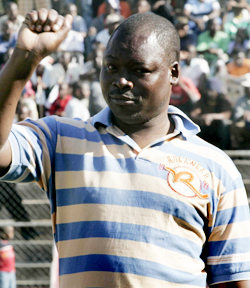 HARARE City staged a dramatic come-back from behind to see off 10-men Bulawayo City 2-1 in a Castle Larger Premier Soccer League tie at Rufaro Stadium on Friday.
Moses Chunga’s men went into the match seeking to recover from last week’s defeat to Harare giants Dynamos and they did it in remarkable fashion after the visitors had gone ahead towards the end of the first half.
It was however, Harare City who were dominant in the first half in which they had two goals from Ronald Chitiyo and Diro Nyenye ruled for off-side by referee Thabani Bamala.
But the visitors appeared to soak all the pressure from the home team with Lewis Ncube coming close on 41 minutes only to direct his effort wide.
They were 1-0 up at the stroke of the first half as Morris Kadzola beat goalkeeper Tafadzwa Dube off a cross by Trevor Ndlovu.
In the second half, Chunga threw in Raymond Uchena in place of Jimmy Tigere and pulled off Honey Chimutimunzeve replacing him with William Manondo.
The strategy paid off on 80 minutes, with Chitiyo scoring a brilliant goal, profiting from a set up by Farai Madhanaga to beat goalkeeper Ndodana Sibanda with a low shot for the equaliser.
After the equaliser, the home team began to launch a series of raids in their opponents’ goal, and Brian Chikwenya appeared to have deliberately handled a goal-bound shot by Chitiyo, and Bamala flashed a red card for the defender before awarding a penalty.
Manondo accepted the penalty responsibility, sending the goalkeeper the wrong way to sew up the contest.
With the victory, Harare City leapt to seventh place with thirty points while Bulawayo City dropped to eighth place with 28 points.
Chunga was happy with the victory, saying: “It is sweet considering it was the first time we came from behind.
“They (his players) showed character today. Before, we couldn’t come from behind.
“We want continuity but we had too many injuries and if you noticed today it was difficult for us to build from the flanks and I hope when the other guys come we will have options.
“We were giving them too much room in the first half and in the second half I told them we have to keep possession and we managed to win.”
His counterpart Try Ncube said, “We were guilty of defending too deep in the second half and the penalty decision, I doubt it was penalty.Advertisement

“We are disappointed we wanted all three points.  We defended too deep and I think that cost us the match.”