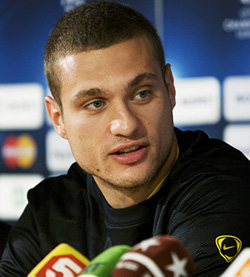 MANCHESTER United are cracking out the cheque book to stop their superb shot stopper heading to Real Madrid, while Jesus Christ has signed for Chelsea. Here are the day’s best stories from the papers.
Manchester United to make De Gea world’s best-paid goalkeeper: The Sun reports that Spanish stopped David De Gea “will be offered a £36.4 million five-year deal that even tops the package which neighbours City are about to agree with Joe Hart” in an attempt “to keep him out of the clutches of Real Madrid”. The report adds that “City and England star Hart is set to sign a 4½-year deal worth £120,000 a week, which would make him the joint highest-paid keeper in the world, ironically alongside Iker Casillas at Madrid. But Real’s pursuit of De Gea as Casillas’ replacement is forcing United to offer even more.”
City line up move for Argentine midfielder Correa: The Daily Mail reports that Manchester City “are understood to have held talks with Estudiantes over a possible £8million deal for Argentina prospect Joaquin Correa. Chelsea, Paris Saint-Germain and Monaco have all checked on the 20-year-old attacking midfielder.”
Arsenal join chase for Pogba: The former Manchester United midfielder “is destined to make a return to the Premier League, with United, City and Chelsea all heavily linked with a move for his services,” according to the Daily Express. The reported fee is £40m.

Hammers stick £20m price tag on Reid: Winston Reid has been mentioned as possible signing for Arsenal and Liverpool in January following a good few months at Upton Park, but it seems Sam Allardyce will play hardball. The Daily Mail (among others) report that West Ham will insist on £20m, based on quotes from Big Sam. That’s despite Reid’s contract expiring in the summer.
Vidic rubbishes Old Trafford return rumours: Nemanja Vidic has poured cold water on suggestions that he could go back to Manchester United to restore some much-needed steel to the Red Devils’ back four. The Daily Express quote the former United star’s agent saying bluntly, “It is lies. Nemanja has a three-year deal with Inter and will not leave Milan.” Advertisement

Jesus Christ signs for Chelsea: The Independent reports that one in five children think that Jesus Christ is a Chelsea player. In a survey of 1,000 arch, sarcastic and cheeky scamps, 20 per cent went for option ‘a’ when asked if Jesus was: “a) A footballer for Chelsea b) Son of God c) TV presenter d) X Factor contestant or e) An astronaut.”