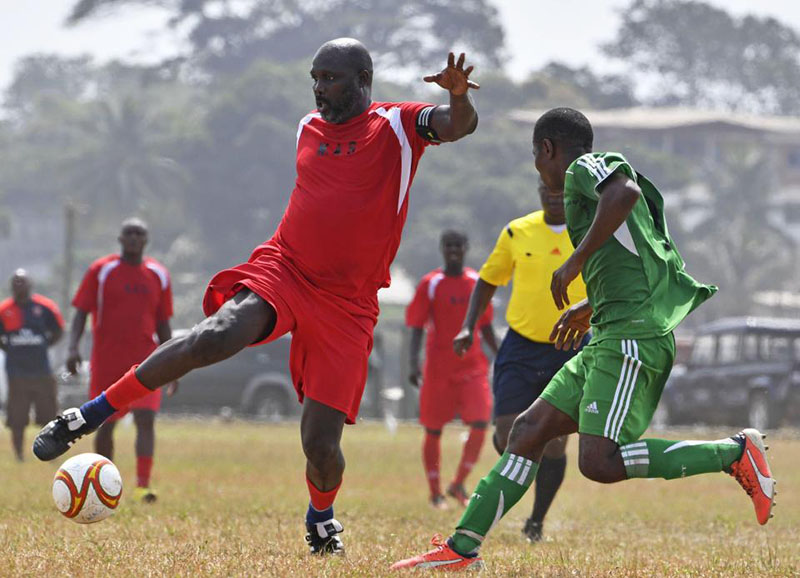 Liberia president and former world footballer of the year George Weah made a surprise return to international football Tuesday at the age of 51 in a 2-1 friendly defeat by Nigeria.

The international match in Monrovia was organised to ‘retire’ the number 14 shirt worn by Weah, who was voted world, European and African footballer of the year in 1995.

Weah, who scored a landslide victory in presidential elections last December, is the only African footballer to win the world and European awards.

Instead of watching the match against Nigeria from the grandstand, he captained his country and showed glimpses of former skills before being substituted 12 minutes from time.

Weah received a standing ovation when leaving the pitch in the capital of a west African country where football is the most popular sport.

Team-mates of Weah wore shirts with “Thank you King George” on them as a tribute to the legend who retired from international football 16 years ago.

Libera are ranked 47th of 54 African football nations and 158th in the world. The last of their two Africa Cup of Nations tournament appearances was 16 years ago.

Weah played in Liberia, the Ivory Coast and Cameroon before moving to Europe, where his clubs included Paris Saint-Germain, Monaco, Marseille and AC Milan.

He also had brief spells with Chelsea and Manchester City before finishing his career in the United Arab Emirates playing for Al Jazira.

In the friendly match, Nigeria built a two-goal half-time lead thanks to Henry Onyekuru and Simeon Nwankwo and Sherman Kpah converted a late penalty for Liberia.