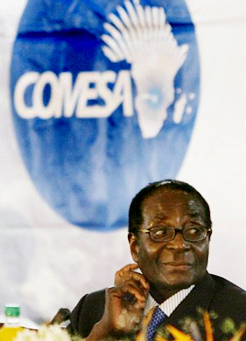 PREHAPS I’m a despicable, counter-revolutionary, neo-colonialist settler after all.
During my entire adult life, I have called myself an African. I have visited most countries on the continent and I have met and/or interviewed 13 heads of African states. I’m proud of and associate myself with the people, history and cultures of the people of Africa.
I have written much about and made two documentary films on pre-colonial and early colonial African history.
But now I find myself out of sync with many of those who also claim to be proud Africans. The Africa I’m proud of appears to be a different one from the one they revere.
I’m deeply proud of African leaders who fought for the liberation of Africa and the emancipation of her people. I’m talking about leaders like Patrice Lumumba, Kwame Nkrumah, Leopold Senghor, Samora Machel, Kenneth Kaunda, Julius Nyerere, Nelson Mandela and Thomas Sankara.
But now I find that the darling hero of so many of my fellow Africans is a man who has almost single-handedly destroyed his country’s economy, massively enriched himself and his cronies at the expense of the citizens, overruled an election result, tolerates little criticism and opposition and rules like a tyrant.
Leaders of the ANC, its youth league, the Economic Freedom Fighters and many public figures and commentators have hailed Robert Mugabe as the “true African liberator” and an “inspiration”. Last week African ambassadors in China, where Mugabe was visiting with an outstretched begging bowl, called him “a true son of Africa”.
My colonialism-infected brain tells me that Mugabe gets this kind of hero worship because he has had the guts to insult his former colonial masters to their faces – at a public rally I attended, he once called former British prime minister Tony Blair a “sick homosexual” and a “dog”.
My settler brain concludes that Mugabe’s demonising of white Zimbabweans and kicking them off the land lies at the heart of this reverence for the Zimbabwean president.
I get that. Most Africans in the region feel the anger and resentment towards racist white settlers and the West that colluded with them for so long and wish they could express it themselves as powerfully.
I get that so many Africans rejoice that native Zimbabweans at last got their ancestral land back that was occupied for so long by the white minority. I get that completely.Advertisement

I also get that Mugabe was a very brave and effective leader of the Zimbabwean liberation movement and I respect him for prioritising education during his first decades in power.
But I think he has, in the past six or so years, done so much damage to his country and the region that he doesn’t deserve any praise.
This is my question: isn’t there more to African pride than simply smacking white people in the face? Can punishing the white minority and insulting Western “imperialism” really make up for oppressing and impoverishing your own fellow Africans?
This is where my pride in being an African seems to part ways from that of others.
Mugabe’s recent “liberation” project has had the result that unemployment in his country is in the region of 80 percent. As I write this, there are long queues at the Harare passport offices of people desperate to get travel documents to leave the country. The World Food Programme is feeding about a million starving Zimbabweans this year.
The headwaiter at my local watering hole is a sophisticated, gentle Zimbabwean with a psychology degree. He had to flee for his life because his parents were known as supporters of the Zimbabwean opposition. He is an experienced child psychologist and his skills are desperately needed by the children of his home country.
There are thousands of Zimbabweans like him in South Africa. Where is the pride now? What kind of African liberator rules his country in a way that more than 4 million, about a quarter of the population, had to flee persecution or leave the country to find jobs?
And then Mugabe had the temerity to say at the weekend that South Africa was failing to lead and help the economies of Africa because of the economic dominance of white South Africans.
My idea of a proud African leader is one that empowers his/her citizens to live with dignity and hope; allows them the freedom to speak their minds and associate with whom they want; one that governs in a way that makes his/her country self-sufficient and live up to its full economic potential.
Where am I going wrong when I say that African pride should go a lot deeper than cocking a snook at former oppressors, especially if it’s at the expense of the well-being of ordinary Africans?
Max du Preez is a South African author and columnist.