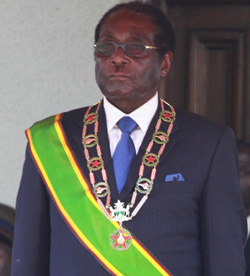 THE political personality and historical project of Robert Mugabe is bound to arrest the attention of thinkers and writers for a long time to come.
The Zimbabwean President has attracted extreme reactions that range from worship to caricature. In one person, Robert Mugabe combines a bullet dodging villain for many, and a gallant liberator for others. Some Zimbabweans have publicly prayed for his death while others have openly pleaded with the almighty that he should be given an eternal life. Little attention has been paid to just how much of all of us is in Mugabe and how much of Mugabe is in all of us as subjects in the present world order.
For that reason Mugabe’s life and health has become an important subject in the media and social circles. The event of his death is one event that is so much awaited for by his enemies, of which he has many, and supposed friends who are getting fewer by the day.
My aim in this article is in actuality to argue that there is nothing amazing about Mugabe and the many events and incidents that he has occasioned. What is amazing is that many of us, including those who are supposed to know better are amazed at the melodrama and spectacles that recent history has witnessed around the person, family, party and country of Mugabe.
I also wish to establish that Mugabe is a product of the African colonial condition as much as he is a creature of his own excesses and weaknesses and the faults of those who advise him.  Finally I wish to draw the attention of the thinking world to the possibility of economic recolonisation, a coup and or civil war in Zimbabwe. Once again, I must state, this article is written for political thinkers and activists.
His Excellency the Head of State
Recently deceased Kenyan historian and political scientist Ali Mazrui ignited a high voltage debate in the African academy when he noted that Kwame Nkrumah of Ghana was a “Leninist Czar” who was a “great African” but a “terrible Ghanaian.” The combative Mazrui insisted that “while Nkrumah entered the leadership of Ghana as a revolutionary, he left as a despot,” as opposed to Jerry Rawlings” who; Mazrui said “came in as a tyrant but left as a revolutionary.”
From where I am standing, it is no difficult to see Mugabe in the same light in which Mazrui saw Nkrumah. In his combative Pan- African rhetoric and open challenge and condemnation of western imperialism, Mugabe has fashioned himself and earned a lot of admiration and support in Africa and the global South as a gallant fighter. In Zimbabwe however, Mugabe is identified with many mass-graves, ‘degrees in violence’ that have maimed many. He is identified with a sordid political personalism that has seen him ditch his war time friends to promote his wife who is known as just a trendy shopper and not a revolutionary.Advertisement