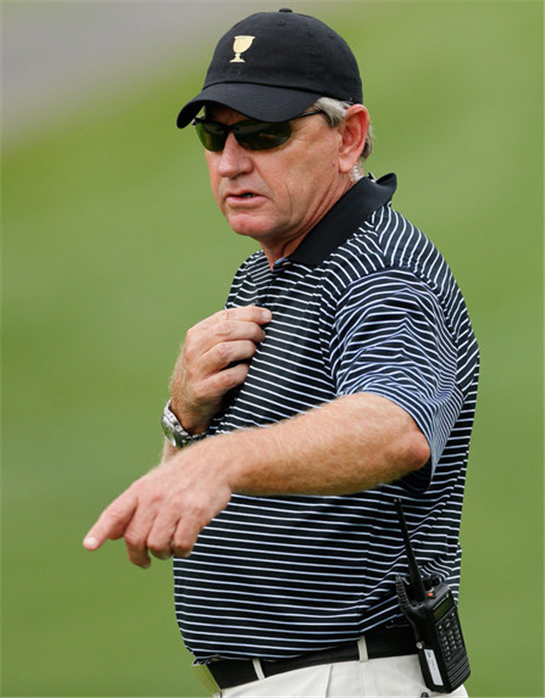 LOS ANGELES: A points change for this year’s Presidents Cup is “a move in a positive direction” but, long-term, the biennial team competition should mirror the format used at the Ryder Cup, says International captain Nick Price.
Earlier last week, the PGA Tour announced that the total number of points on offer at the Presidents Cup will be reduced to 30 from 34 for this year’s edition in South Korea, much closer to the 28-point tally competed for at the Ryder Cup.
Three-times major winner Price, whose 12-man team will take on holders the United States at the Jack Nicklaus Golf Club in Incheon from October 8-11, has long argued for a reduction in team matches to aid competitive balance.
“To go from 34 to 30 points is a good change and it’s certainly a move in a positive direction,” Zimbabwean Price told Reuters in a telephone interview.
“But I, and most of us on the International team, still believe that in years to come it needs to go to 28 points, it needs to mirror the same points structure as the Ryder Cup for it to become more consistently competitive.”
In Price’s opinion, fewer points give the stronger team less of an advantage as the weakest players do not compete as often, and he believes this would help the Internationals improve a dismal record of just one win against the U.S. in 10 editions.
“I don’t think the Ryder Cup would have been as successful if they had the Presidents Cup format,” said Price, a former world number one who competed in five Presidents Cups as a player.
“The Ryder Cup has a proven system that has led to exceptional excitement over the years. They’ve had the Ryder Cup for nearly 90 years now and they’ve been through five point changes and one qualification criterion change.
“But the current system, Europe versus the United States with 28 points, was introduced in 1979 and this has been the longest running Ryder Cup stretch without any change to the format.”
Several reincarnations
The Ryder Cup, which began in 1927 between the U.S. and Britain, has gone through several reincarnations with points tallies of 12, 24, 32 and 20 on offer before the most recent switch was made to 28 for the 1979 matches at The Greenbrier.
“So that tells me something must be working,” Price said, referring to a points structure which has remained in play for the past 18 editions of the Ryder Cup. Advertisement

“Why would you try and invent the wheel and come up with a different format for the Presidents Cup? It would almost be like saying, ‘Why don’t we have eight-round golf tournaments instead of four-round golf tournaments, let’s try that?’
“Well, everyone has tried that and we know it doesn’t work. I think that a lot of the International players who have got four or five Presidents Cups behind them will keep pursuing a points system to mirror the Ryder Cup in the future.”
Asked whether his players would have an extra bounce in their step heading into this year’s Presidents Cup due to the points change announced on Monday, Price replied: “Put it this way, this is not going to be the same as the last five (Cups).
“That’s what we are looking forward to. There is a change but that doesn’t necessarily mean that we are going to win or whatever but we all want it to be a better contest.”
The U.S. have established a virtual stranglehold at the Presidents Cup, winning the trophy at Muirfield Village in Dublin, Ohio in 2013 for the eighth time in 10 editions.
The only success for the Internationals came in 1998 when the event was first staged in Melbourne. In 2003, the teams battled to a 17-17 draw in South Africa.
“Win, lose or draw – we’d really like it to come down to the last hole, the last match on Sunday, which is I think what everybody wants,” said Price.