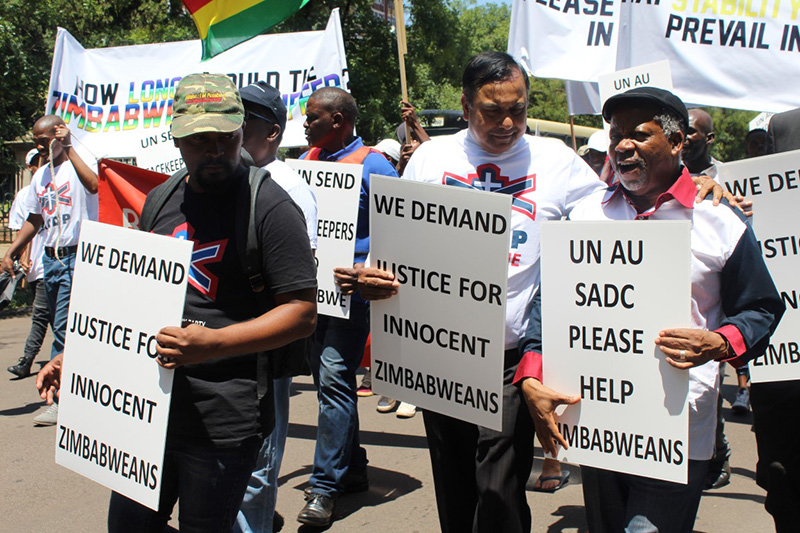 By The Pretoria East Rekord

SOUTH AFRICA: Local Zimbabweans took to the street of the Pretoria CBD on Thursday in protest against the killing of their “innocent countrymen”.

The marchers gathered at Burgers Park where they began their march to the UN head office in Pretoria.

The march was led by ACDP president Rev Kenneth Meshoe, who asked protesters to behave peacefully. He reminded the crowd that they were all human before anything and should not be angered into violence.

“Some of the things happening in Zimbabwe are not nice and may make you angry, however we need to contain this anger and not speak of hatred.”

Meshoe said the protest was to call for justice in Zimbabwe.

He said the UN was quite before when Rwanda had a genocide against the Tutsis, but this would not be allowed to happen again

Moosa Kumbe ACRM president said he was happy to see local citizens and not just organisations “taking action to end the Zimbabwean tragedy”.

He said there was a need for African countries, especially Southern African developing countries to unite and aid Zimbabwe.

Kumbe said those innocent civilians needed assistance and did not understand how the people who were supposed to protect them, were the ones causing misery and death to them.

Rufaro Chikwanha, a Zimbabwean and a pastor at World Revival Church, said Zimbabwe needed a strong voice of reason to end the sufferings.