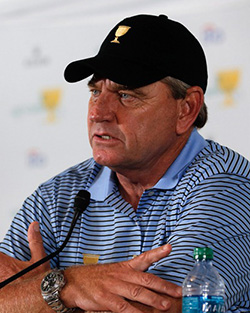 DRAWING players from the far-flung corners of the globe and trying to build a team just days before the Presidents Cup has been a factor in the Internationals’ poor record in the event, but 2015 captain Nick Price has a few tricks up his sleeve to change things around.
Price, speaking at a news conference in Incheon on Wednesday, said it was difficult to build cohesiveness when players from different tours on different continents, and who speak different languages, had only days to prepare together for the biennial event.
Since the Cup was first staged in 1994, the United States have won eight and tied one of the 10 events.
Price’s International team will again have their work cut out to halt the slide when the event comes to South Korea next year at the Jack Nicklaus Golf Club from Oct. 8-11.
Price, who has played in the event five times, said he had attempted to overcome the logistical difficulties as captain ahead of the 2013 event by travelling around the world to meet potential players and formulate a strategy.
“In 2012 I made a concerted effort to go out and meet all the players in the 15 months preceding the event and started talking to them,” he said.
“Especially the veterans, Adam Scott, Ernie Els, Jason Day, guys who had played in multiple Presidents Cups, and asked them what they felt was lacking. Or what was going to be the best way for us to motivate the team and get them fired up to play against the Americans in America.”

Price’s team for the 2013 Cup at Muirfield Village in Ohio consisted of players from his home country of Zimbabwe as well as South Africa, Australia, Argentina, Canada and Japan.
“The unusual thing was that the only time we were all in the same room together for the first time was on the Monday before the event,” he added.
“But the cohesiveness of that team, and the morale and team spirit was so evident in that first meeting, they were so keen and had the mindset that this was going to be the one that we were going to turn it around.”
Unfortunately, the International team could not translate that confidence off the course to success on it, losing for the fifth straight time.
“What happened over the next five, six days can only be surmised by saying: ‘That’s golf.’ I don’t know how best to explain it. Those guys played their hearts out, they played their tails off, did everything they possibly could on the course to stop the Americans from winning again. But we lost.Advertisement

“So it leaves me in a bit of a dilemma as to how to approach the 2015 Presidents Cup,” added Price, who won three majors in the early 1990s.
“I think I’m going to do a lot of the same things — travel and spend time and have dinners with them. There’s a lot of work ahead of us, coming up with a team that can take on the might of America. But I have a few tricks up my sleeve this year.”
Like Price, U.S. team captain Jay Haas played in the very first Presidents Cup in 1994 and was a winning assistant captain to Fred Couples for the last three editions.
“It sure doesn’t seem like 20 years has passed since that first Presidents Cup,” he said. “Being here the last couple of days, the magnitude of the event has hit home.”
Haas said playing in the 1994 and 2003 competitions had been some of the best moments of his career.
“This is about pride, this about country, team, the individual side is put aside and you are striving to do your best for your team,” he added.
“And that’s something on a personal level that’s probably been the greatest gift given to me in my career as a golfer.
“The camaraderie, the sportsmanship… there’s no other sport like it. It brings the world together.”
While Haas and Price remained firm friends off the course, the American said he would be going all out to record yet another win over the Internationals in 11 months’ time.
“I can assure you we will do our best to uncover just what is up Nick’s sleeve, the tricks that he has in store for us,” he added.