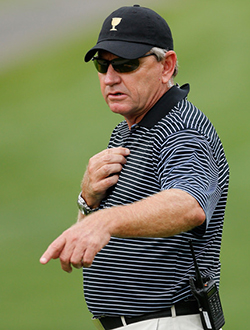 INTERNATIONAL team skipper Nick Price is leaving no stone unturned as he formulates a plan to wrest the Presidents Cup from the United States for the first time in more than a decade, according to co-captain Tony Johnstone.
Price, along with assistants Johnstone, Mark McNulty and South Korean KJ Choi, will look to guide their team to victory when the event comes to Asia for the first time in October at Incheon’s Jack Nicklaus Gold Club Korea.
The United States have won eight of the 10 Presidents Cups played since the biennial competition was established in 1994 and will be heavy favourites for this year’s contest.
The International team, representing the rest of the world minus Europe, have won the event once — in Melbourne in 1998.
If they fail to clinch the trophy this year, it will not be for a lack of trying, said Johnstone in a news release.
“Nick has put his heart and soul into this year’s competition and has not played as much this year, to focus more on the team,” said the 59-year-old, who won six times on the European Tour.
“He has covered every angle that needs to be covered, and we will be hoping that his dedication to the team pays off in October.”
Johnstone said that while on paper the United States would probably have the stronger group, rankings took a back seat to camaraderie in team play.
“It doesn’t matter if you are the world number one or 800, team spirit plays a huge role in match play and it’s down to us to ensure that spirits remain high throughout the week,” added Johnstone, who also works as a television golf commentator.
McNulty, who won 16 European Tour events and was tied for second at the 1990 British Open, said local knowledge and a home-crowd support could give the Internationals a winning edge.
“The Presidents Cup has not been in Asia, so with Asia producing so many great golfers, now it’s very deserving,” added the 61-year-old, who was born in Zimbabwe but took Irish citizenship in 2003.
“Having KJ on board is a big deal for us. What with the possibility of having a couple of Korean players on board too, that will help the crowd to get strongly behind the International team.”Advertisement