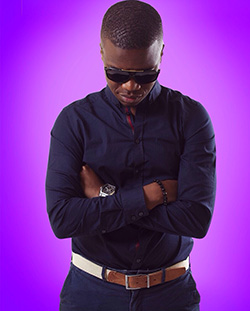 HIS name is set to be on the lips of many ladies in the not-too-distant future as he models himself into the archetypical singing Adonis … his name and lipstick that is!
Judd has become the newest phenomenon on the music scene in Zimbabwe with the release of his affable single and accompanying music video entitled Angel. And yet the teenage heartthrob in waiting is not entirely new.
In fact, Judd is Prince Tendai Junior, the son of the late former Midnight Magic music sensation and crooner of hits that include the chart-smashing track Character; that is Prince Tendai Mpfurutsa who succumbed to motor neuron disease three years ago.
And now the Prince’s musical monarchy seems to be on the track to be continued by the spawn of his loins in much the same manner as Simon Chimbetu through Suluman, Naison Chimbetu through Tryson and Tongai Moyo through Peter amongst other father-son legacy handovers.
But Judd is his own man and is destined to emerge from the shadow of his father which threatens to belittle him.
“I know there are high expectations of me based on my late father’s work and legacy,” said the confident 28-year-old.
“Though I want to make him proud and carry his name with honour, I want to do it by creating my own following and an independent name and not ride on his accomplishments or his name.”
And he has started on that track of not riding upon name recognition.
Besides choosing a stage name – Judd, which says nothing about the royal musical blue blood that flows through his veins, he has a distinct ultra-modern RnB touch to his music that is light years detached from what his father used to play.
“It’s a celebration of who I am as a musician and Angel is the result of this creativity that I have always had within me,” he confidently announces.
Having moved back home from England where he attained his first degree to run his father’s business empire, Judd has sought to harness the rich heritage of music that has been around him from the day he let out his first cry.
“Music was always around me and so it was inevitable that I would venture into it one day or the next,” he says.
Angel is a work of rich creativity and it has already seen him turn a few heads with his music and the juggernaut continues. He has even had a date with the Zimbabwe Big Brother Hotshots fan-club crew which he is set to fulfil owing to his almost palpable talent.Advertisement

“It is something I was born to do. I was born to entertain and I feel at home making music. It comes as second nature to me,” he quips.
What is almost dead certain is that Prince Tendai Junior a.k.a Judd is a name destined for national musical history.
JUDD – ANGEL