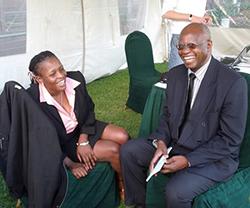 OOPS! I titled this piece “Priscilla Misihairambwi-Mushonga: Any more ‘useless’ condoms?” But all the same, the subject is synonymous with the case and I am happy democracy is there somewhere between the walls of the august house, and my sister Priscilla is not gyrating any less.
At least Priscilla was promised continuum in service under the National House of Assembly even following her self-made decision to eject herself from the splinter opposition, the Movement for Democratic Change led by Prof Welshman Ncube (MDC-N). That in itself bespoke much of what was to come from the acutely-liberal-in-speech politician. She indeed had no one to blame; even Prof Welshman Ncube, blessed her and wished her smooth sailing into that demesne unknown. But that, all the same, made her a political seed of a greater nervous disposition.
On Wednesday, Priscilla shocked many when she took a baby to parliament as specimen to illustrate a point she wanted parliament to hear. But, and unfortunately, she was putting up fire on her own forehead. Many saw her rather as a political destitute seeking a home; many as an old gun barrel exuding nothing but mere soot. More interestingly, Priscilla’s parliamentary demeanor continue to be lurid.
Just like what South Africa had to give during the past immediate annual ‘State of the Nation Address’ SONA, where EFF leader Julius Malema was affronted with an equation of a ‘cockroach’ by Madam Baleka Mbete, who in this case spoke with the political mouth of her ANC nooks than one which represented the South African National Assembly and South Africans, all those who bore witness were put into disdain, much as was the source of the offensive statement. Mbete instantly lost it all.
There should be understanding therefore that the condemnations that trailed never anchored on issues of political allegiance but had their reasoning lined on the regulation of the lingual lineament applicable on national tables. Despite that Julius Malema’s EFF had longstanding political demerits worsened by what most believe has roots in the novice party’s unchecked push for the nationalization of mines in South Africa, that suddenly was shelved to concentrate on rendering poetic justice to Mbete’s non judicious speech. And rightly so, Malema should not be accused of any guilt, considering the amount of negativity that had surrounded the Zuma run institution.Advertisement

Back home, souls like Priscilla would not care. Her inclination towards offensive language had exceeded known parameters of ‘feminism’, human rights championing, freedom of expression, or parliamentary honour. Just as Joseph Chinotimba had been awarded with unwarranted renown as the ‘care-less’ parliamentary buffoon (for which I attest he has no succinct qualities of being such), Priscilla’s competitively glimmering foreground radicalism can never be ignored and it calls for attention. Directly or nay, her character (defined by position) should construct not only one person or destruct.
Her much more radical statements would not erase at high speed. Priscilla had once rubbished politicians in Matabeleland, referring to them as ‘useless condoms’ who had sold out the region. This, she ironically said whilst still Minister of Regional Integration and International Cooperation during the ‘confounding’ era of the Government of National Unity (GNU), and just before her coincidental union with the same politicians where she represented Magwegwe constituency.
Regulars tot the Zimbabwean National House of Assembly, where she sits as a Member of Parliament on the basis of proportional representation would remember this one:
“Mr. Speaker Sir, I cannot sit down before I raise my favourite subject of sanitary wear. The President could not have spoken about the role of women in society as they go through menstruation.”
And;
“Mr. Speaker, you are asking us to be more radical and I do not think when we become radical, you will appreciate what we will do in this House. So, I implore you Mr. Speaker that in your own time, when you find the Minister of Finance and Economic Development, we are not threatening this time but we will do what we said we will do.”
Ignore her labeling of Grace Mugabe in August 2014 as a “Pawn star in Zanu PF politics’ for which she even penned a rebuking article which a private daily had the honour of publishing. Of course, there are those whose belief in Priscilla cannot be adjusted. And that belief should not be calculated in isolation from statements Priscilla has made in foregone years. My archives are interesting.
At least Baleka Mbete apologized to Julius Malema, although some quarters, including political analyst, one Eusebius Mackaiser believed Mbete’s apology was heavy to consume because of the label’s strong connotations with the Rwandan genocide with many favouring to call for her resignation. The darkest side of the erased statement is seen as having intended to incite an uproar on the whole movement of Malema’s Economic Freedom Fighters, sucking in those with no ideological equalization with the EFF.
This, being more or less going with the same grain as with the story around the narration of Itai Dzamara’s believed abduction which today stands celebrated by the now weak Zimbabwean opposition, evidently seeking to profiteer from Dzamara’s presumptuous stance against the Zanu PF government (I leave this for my forthcoming instalment). I believe Dzamara’s story is one which seeks genuine support and, definitely not from vulturing political organs. Mbete’s radical statement was accepted with relations of what such statements have evoked in the past, and what South Africans feared. Even xenophobic attacks became outputs from reckless mouthing.

Ok. Let’s face it. Priscilla’s installments should further be validated. Interrogated, I will agree with her on one thing. That of the emerging need to have non reactionaries as our nationally endorsed Members of the House of Assembly. We have argued as citizens on how CDFs were blown. And perhaps, Priscilla’s calibre can handle radical debate around such matters. And also, Madam Priscilla’s advocacy for women’s rights should never be blatantly dismissed. But has she been a sufficing example herself in the preservation of dignity for females?
Priscilla, also has something on ‘tribal capitalism’ will always remind me my now favourite Honorable Minister Louis Farrakhan whose stance on his philosophies is never capricious. Minister Farrakhan on February 14, 1986 at the Kwame Nkrumah Centre in Accra, Ghana, spoke with grandeur in his speech called “Unity and Peace: The End of Tribal, Religious and Political Divisions, In which he said “But if Allah (God) is one, and He is, then we should strive to understand that Allah is not interested in fractions [or] factions, for He is One. Allah (God) is not interested in sects or parties, tribes or races. He is interested in the oneness of humanity, and so He wants to move us toward that oneness”. Compared, Farrakhan dwells on verity.
Although a trifle realized, Mushonga has had an opportune time to teach people as is deemed of her. That is what she did not do, or maybe did in her own ways. For even Thabitha Khumalo, given any limited time, would froth over the issue of the decriminalisation of prostitution, even radically so, allege the Biblical Eve (of the Garden of Eden), was a prostitute.
“Prostitution is here to stay and we need to bite the bullet. Pleasure engineering did not begin in Bulawayo or Zimbabwe. It all began in the Garden of Eden and one of those pleasure engineers was Eve,” said Khumalo one time while signing a petition to decriminalize prostitution. Did Thabitha not shock anyone like what befell the Spanish a few months back? Or should we say Spain’s Yolanda Couceiro Morin campaign boob was much worse than the Thabitha Khumalo goosy trip.
Morin stripped off in a campaign poster to get attention, in the hope that the right-wing Party for Freedom will be seen as a credible alternative to the left-wing parties known as ‘la casta’. In the poster, Yolanda Morin only covered her private parts with her bare hands while the words ‘Politicians have left us stark naked’ was the only message that carried her campaign thrust. And obviously so, the whole world laughed.
Thabitha Khumalo, who represents the Movement for Democratic Change (MDC-T) for Bulawayo East constituency in the National House of Assembly became the source of headlines in the Zimbabwean local media after marauding MDC-T youths are alleged to have left her in her bra at the party’s district rally held in Njube Suburb, Bulawayo sometime back. Khumalo, like Mushonga, has been the loose bolt in the disintegrating opposition in Zimbabwe heightening gloomy brands of the opposition and what it signifies.
Such is the politics in a country where everyone has something to blame, and then leave it there, without a solution! And whether Priscilla has reason on what she does, the people are already in disappointment!
Zisunko Ndlovu can be contacted at kubutonga@gmail.com