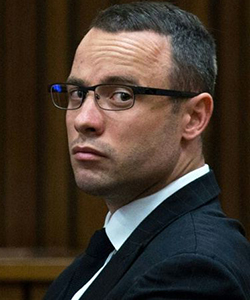 A PRISON gang leader has threatened to punish disgraced Paralympian Oscar Pistorius, if he attempts to use his wealth to secure privileges in jail.
Under South African law, Pistorius, 27, faces up to 15 years in jail, after being found guilty of culpable homicide for killing his girlfriend, model Reeva Steenkamp, 29.
Pistorius could be fined for the homicide, but if imprisoned, he could be sent to the notorious Pretoria Central Prison, known as C-Max.
Speaking from a call box in the prison a gang leader, nicknamed The General, told the Sun that Pistorius could expect a rough ride if he attempts to use his celebrity and wealth to secure ease and safety behind bars.
“Anyone who thinks they can come here and live like a king, will have a hit on their head,” Khalil Subjee, leader of the notorious 26s gang told the newspaper.
“If he thinks he is going to buy his way to computers and mobile phones, he must know that will never happen as long as I am around,” said Subjee, 47, who is serving a life sentence.
Special treatment possible
Others believe that double amputee Pistorius may escape imprisonment in the main wing of the jail, and would be safeguarded by authorities.
He is likely to be incarcerated in a prison with wheelchair access facilities.
Prison reform expert Lukas Muntingh says that wealthy prisoners face extortion, and often buy protection.
“He’s likely to get preferential treatment as the authorities will be in trouble if something bad happens,” said Muntingh.
After Steenkamp’s death in February 2013, some questioned why Pistorius was held in a holding cell in Brooklyn Police Station, and not at Central Prison or Newlock, where other prisoners awaiting trial are kept and was allowed to see family outside visiting hours.
“If there is some special circumstance that permits this, authorities must share this with the public as they are setting a bad precedent,” the women’s branch of South Africa’s ruling ANC party said in a prepared statement.
“All should be treated equally before the law no matter your standing in society.”Advertisement